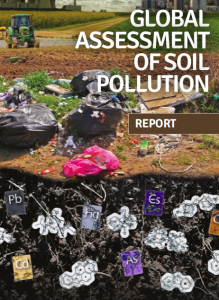 Soil pollution is deteriorating worldwide as a result of unsustainable farming practices and industrial processes, all of which poses a major and growing threat to global food production, human health, and the environment, the United Nations has warned.  A global response to the mounting crisis facing the world’s soils is urgently needed from governments and businesses, it said, as poor soil health and pollution is compromising food and water supplies, as well as air quality.  Industrial and mining activities, poorly managed urban and industrial waste, fossil fuel extraction and processing, as well as unsustainable agricultural practices and transport are the main culprits behind damaging soil pollution identified in a report by the UN’s Environment Programme (UNEP) and Food and Agriculture Organisation (FAO) released late last week.

The joint assessment of the health of the world’s soils underscores the scale of the soil crisis and its myriad impacts, concluding that environmental degradation caused by soil pollution is one of the world’s most pressing challenges.  FAO director-general QU Dongyu said a coordinated response to address soil pollution and boost soil health in line with the UN’s 2030 Sustainable Development Goals (SDGs) was urgently needed, as soil health is fundamental to ensuring a healthy planet. “Soil protection is of the utmost importance to ensure the success of our future agri-food systems, ecosystem restoration and all lives on earth,” he said. “Our society wants more nutritious and safe foods, free of contaminants and pathogens.”

The report highlights how soils are being damaged on multiple fronts thanks to a combination of unsustainable farming and industrial practices. For example, it estimates use of pesticides increased 75 per cent between 2000 and 2017, while around 109 million tonnes of synthetic nitrogen fertilisers were applied around the world in 2018.

Meanwhile, the use of plastics in agriculture has also seen a sharp increase in recent decades, reaching 708,000 tonnes of non-packaging plastic in the EU alone in 2019. And the global annual production of industrial chemicals has doubled to around 2.3 billion tonnes since the turn of the Millennium, and is projected to increase by a further 85 per cent by 2030. Waste levels are also on the rise, with the report projecting an increase from two billion tonnes produced each year worldwide to 3.4 billion tonnes by 2050, as a result of rising population growth and urbanisation.

Scientists believe many contaminants released into the world’s soils from agriculture, industry, and waste production can stick around in the environment for hundreds of thousands of years and are now widely distributed across the planet. Yet relatively little is known about most contaminant releases as – other than pesticides – they are not quantified, according to the report.

Much greater research is needed to determine the extent of soil pollution worldwide, it warns, adding that the proliferation of organic contaminants as well as pharmaceuticals, antimicrobials, industrial chemicals, and plastic residues are all areas of growing concern.  “Despite decades of research, inventorying and monitoring of point-source polluted soils in a number of countries, there are still significant knowledge gaps and uncertainty about the number and extent of areas affected, which is compounded by the emergence of new contaminants,” it states. “The knowledge gap on soils affected by diffuse pollution and its impact on other environmental compartments is even greater.”

It further warns that turning the tide of the growing soil pollution crisis will prove “complex and costly – potentially running to hundreds of millions of dollars per year – and argues the immediate focus should turn to prevention to stop the situation worsening”.  The report calls for the establishment of a Global Soil Pollution Information and Monitoring System, stronger legal frameworks for preventing soil pollution, and more collaborative initiatives between companies and governments to counteract the growing problem.  “In the current scenario of a worsening global trend in soil pollution, greater political, business, and social commitment is needed to seek alternative solutions to the use of highly toxic contaminants and increased investment in research, prevention and remediation,” it states.

The report came as the UN on Saturday launched its ‘Decade on Ecosystem Restoration‘ campaign, designed as a rallying call for the protection and revival of millions of hectares of ecosystems around the world by 2030.  UN Secretary-General António Guterres described the task as “monumental” but both critical and achievable. “We need to clean up our rivers and seas, and we need to green our cities,” he said.  “Accomplishing these things will not only safeguard the planet’s resources, it will create millions of new jobs by 2030, generate returns of over $7tr dollars every year and help eliminate poverty and hunger.”

Verde undertake characterisation of soils as required by landfill regulations. We undertake the necessary sampling to assess whether a waste is classified as hazardous or non-hazardous.

Avail of Verde’s Soil Waste Classification One Hour Seminar – a must for anybody involved in construction projects particularly where brownfield sites are being developed.