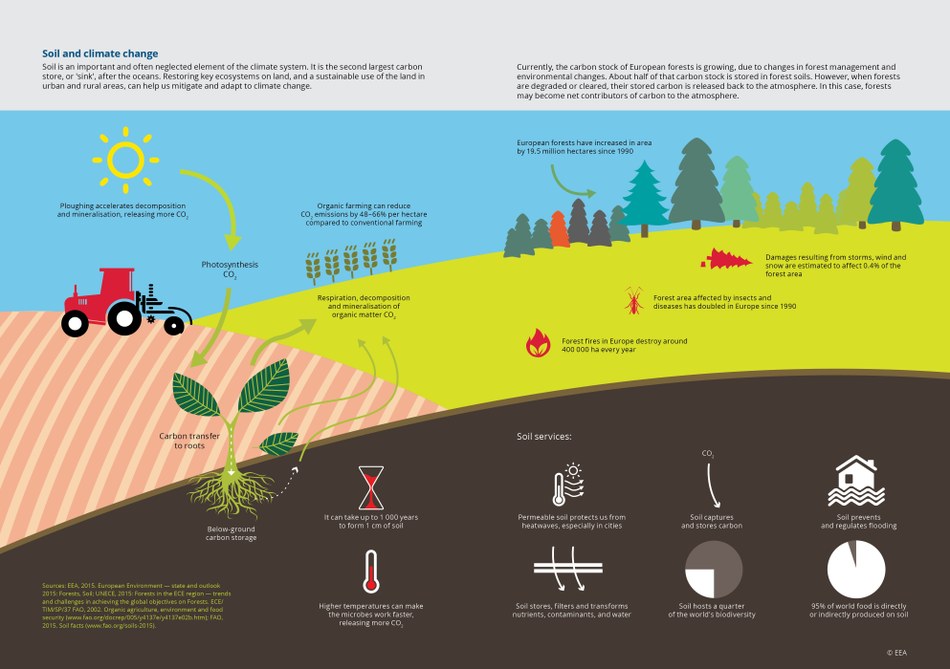 Soil is an important — and often neglected — element of the climate system. It is the second largest carbon store, or ‘sink’, after the oceans. Depending on the region, climate change might result in more carbon being stored in plants and soil due to vegetation growth, or more carbon being released into the atmosphere. Restoring key ecosystems on land, and a sustainable use of the land in urban and rural areas, can help us mitigate and adapt to climate change.

Climate change is often seen as something that occurs in the atmosphere. After all, when plants photosynthesise, they draw carbon out of the atmosphere. But atmospheric carbon also affects the soil, because carbon that is not used for above-ground plant growth is distributed through the roots of a plant, which deposit carbon in the soil. If undisturbed, this carbon can become stable, and remain locked away for thousands of years. Healthy soils can thus mitigate climate change.

When it comes to carbon storage, not all soils are equal. The most carbon-rich soils are peatlands, mostly found in northern Europe, the UK and Ireland. Grassland soils also store a lot of carbon per hectare. In contrast, the soil in warm and dry areas in southern Europe contains less carbon.

In some parts of Europe, higher temperatures may lead to more vegetation growth and more carbon stored in the soil. However, higher temperatures could also increase decomposition and mineralisation of the organic matter in the soil, reducing organic carbon content.  In other areas, the carbon-containing organic matter in stable peatlands is prevented from decomposing due to the low levels of oxygen in the water. If such areas dry out, the organic matter can quickly break down, releasing carbon dioxide (CO2) into the atmosphere.  There are already signs that soil moisture content is being affected by rising temperatures and changes in precipitation patterns. And future projections show this may continue, with a general change in summer soil moisture over most of Europe over the period 2021 to 2050, including significant decreases in the Mediterranean region and some increases in the north-eastern part of Europe.

The increasing concentration of carbon dioxide in our atmosphere may cause the microbes in the soil to work faster to break down organic matter, potentially releasing even more carbon dioxide. The release of greenhouse gases from the soil is expected to be particularly substantial in the far north of Europe and Russia, where melting permafrost may release large quantities of methane, a greenhouse gas much more potent than carbon dioxide.  It is not yet clear what the overall effect will be, as different regions absorb and emit different levels of greenhouse gases. But there is a clear risk that a warming climate can lead the soil to release more greenhouse gases, which can further heat the climate in a self-reinforcing spiral.

Agriculture and forestry to keep the carbon underground

Climate change is not the only thing that risks turning soil from a carbon sink to a source of emissions. The way we use land can also have a clear influence on the amount of carbon that the soil can hold.

On farmland, ploughing the soil is known to accelerate decomposition and mineralisation of organic matter. In order to keep carbon and nutrients in the soil, researchers suggestreducing tillage, farming with complex crop rotations, using so-called ‘cover crops’ and leaving crop residues on the surface of the soil. Leaving crop residue on the surface before and during planting operations can help to protect against the risk of soil erosion. Such protection is essential given that it can take thousands of years to form just a few centimetres of soil. Reduced tillage involves less breaking and turning of the soil. However, reduced or no-till methods are often associated with higher use of chemical fertilisers, which can have other negative effects on the environment.

Similarly, because organic agriculture uses manure inputs, it can rebuild the soil’s organic carbon deep below the soil surface. Organic agriculture has the added benefit of cutting greenhouse gases because it does not use chemical fertilisers. The UN Food and Agriculture Organization calculates that CO2 emissions per hectare of organic agriculture systems are 48% to 66% lower than in conventional systems.  Interestingly, some forms of biofuel production may actually reduce the carbon stored in the soil. A recent study found that biofuels made from corn residue may actually increase greenhouse-gas emissions overall, because the organic matter is burnt as fuel rather than returned to the soil.  Overall, the adoption of appropriate farming and forestry practices offers enormous potential for restoring the soil and removing CO2 from the atmosphere.

After homes in the Belgian village of Velm near Sint-Truiden were flooded with muddy water five times in 2002, the residents put pressure on the local municipality to do something. Floods of muddy water had become a recurring problem in the area as water ran off bare fields, carrying sediment with it. To solve this problem, authorities looked to the soil to protect homes. They adopted a number of measures such as planting cover crops in the winter when the soil was bare and thus at risk of flooding. They also left crop residues on the field to reduce erosion. Such measures to restore natural systems have successfully prevented muddy floods between 2002 and the present day, despite several heavy rainfall events.

Flood regulation and prevention is just one of the vital ‘services’ that healthy soil delivers. We may come to increasingly rely on this service as extreme weather events such as floods become more frequent and severe.

There are many other ways that the quality of soil will dictate how climate change affects us. Permeable soil can also protect from heatwaves, by storing large amounts of water and keeping temperatures down. This latter point is particularly important in cities, where hard surfaces (soil sealing) can create the ‘heat island effect’.  Several European cities are trying to make use of these soil functions. For example, Gomeznarro Park in Madrid was restored to include new permeable surfaces, vegetation and underground water storage. This solution has been replicated elsewhere in Madrid and across Spain.

The latest evidence is clear: restoring some ecosystems can actually help capture carbon from the atmosphere. For example, actively restoring peatlands has proved to be a successful response to the loss of organic carbon that results from peat exploitation for energy use. The fastest way to increase organic carbon in farmed soil is to convert arable land to grassland, according to a study from the European Commission’s Joint Research Centre.  Unfortunately, some recent trends seem to be going in the opposite direction. Between 1990 and 2012, the area of arable land, permanent crops, pastures, and semi-natural vegetation decreased in Europe. More concretely, ‘land take’ in Europe resulted in a loss of 0.81% in arable-land productive capacity as fields were converted to towns, roads, and other infrastructure between 1990 and 2006. Such urban development projects often involve sealing the soil with an impervious layer. Food security concerns aside, this also means Europe has a reduced capacity to store organic carbon, prevent floods, and keep temperatures down.

If managed correctly, soil can help us to reduce greenhouse gases and adapt to the worst effects of climate change. But if we fail to care for the soil, we may quickly exacerbate the problems connected to climate change.

Verde Environmental Consultants are leading experts in soil waste classification.  We have a team of scientists and chemists with extensive experience in the classification process, helping our clients assess the composition of the material and determine the concentrations of the hazardous substances in the material, if present.

The assessment of contaminated soil (excavated soil) to determine whether it is hazardous waste is dependent on the presence of “hazardous substances” exceeding particular thresholds.  Our specialists are trained in the use of the appropriate classification tools and have an in-depth knowledge of the relevant legislation and guidance, which allows them to guide clients in establishing cost effective and sustainable soil management solutions.