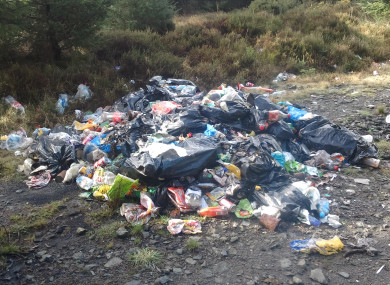 Figures provided by the Environmental Protection Agency (EPA) also show that, in the past four years, the tip-off line has received more than 3,500 calls about issues ranging from noise pollution to illegal dumping.  Last year’s figure of 1,606 is the lowest annual tally in four years and comprises 1,007 complaints about illegal dumping, 235 for air or odour pollution concerns, 93 relating to noise pollution, and 271 calls related to other issues.

More in-depth analysis of the calls to the complaints line shows that in the last three years of operation at least 130 abandoned cars have featured among the complaints. While a small number of those were found in counties Donegal, Galway, Tipperary and elsewhere, the vast majority are in the four local authority areas in Dublin and in the nearby counties of Kildare and Wicklow.

Cork City Council was the relevant local authority in relation to 220 complaints, meaning it was the fourth worst affected area in the country based on complaints to the complaints line.

The situation over illegal dumping in Co Wicklow has resulted in a number of local initiatives, including the Pure Project, which said earlier this year that it had removed 13 tonnes of waste since the start of January.  It is one of a number of projects to use CCTV at various locations to deter fly-tipping and catch those responsible for illegal dumping, while last year the Department of the Environment said increased funding will be made available to employ drones to monitor beauty spots and tackle dumping.