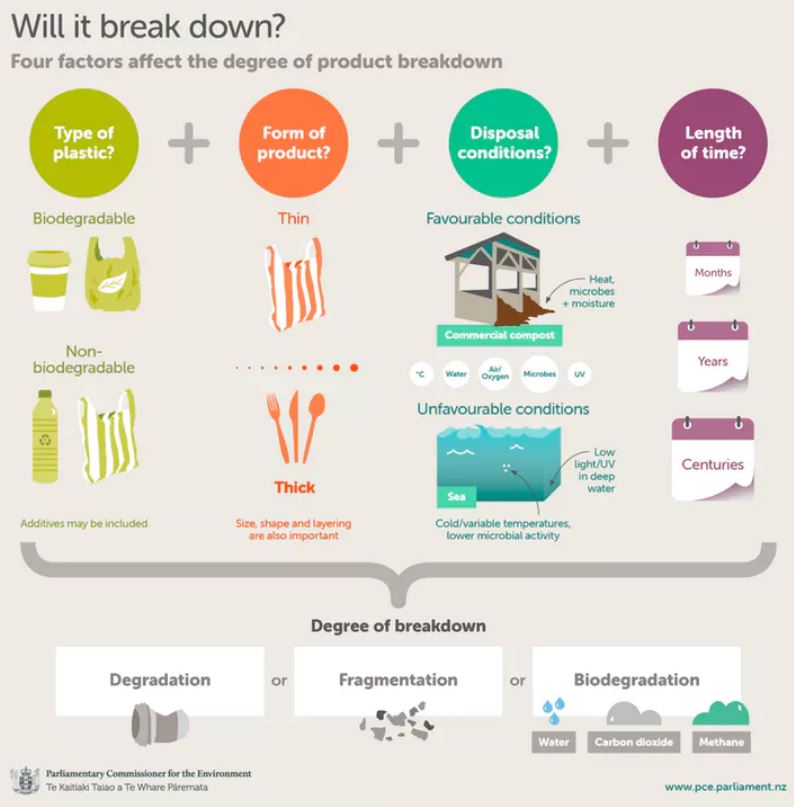 As companies move to get rid of single-use plastic bags and bans on microbeads are coming into force, new biodegradable or compostable plastic products seem to offer an alternative. But they may be no better for the environment.  Recently, European scientists argued that existing international industry standards are insufficient and cannot realistically predict the biodegradability of compostable plastics. New Zealand’s Parliamentary Commissioner for the Environment (PCE), Simon Upton, weighed into the debate, questioning the merit of biodegradable plastics and urging the New Zealand government to deal with the confusion surrounding their labelling.

The key concerns include the terminology itself, the lack of appropriate recycling or composting infrastructure and toxicity of degradable plastics.  We know that plastics hang around in the environment for a very long time. Recent surveys show significant support among New Zealanders for initiatives to reduce single-use plastics.

Newly marketed single-use plastics that claim to be biodegradable suggest that they will break down quickly into benign end products, but the reality is more complex. A degradable or compostable plastic item may indeed deteriorate slightly faster than a conventional product, but only if the conditions are right.  The current industry standards are not taking into account real-life conditions and are therefore underestimating the breakdown times. The standards are also not accounting for the damage to marine life that ingest breakdown particles before a product is completely degraded.  The PCE highlights that biodegradation should not be confused with other natural processes, such as weathering. For a plastic polymer to biodegrade, it needs to be broken down through the action of living cells (mostly fungi and bacteria) into simple chemical elements.  However, as the graphic below shows, the speed of biodegradation can vary greatly, depending on the original material and whether the plastic ends up in a commercial composting facility or a backyard compost heap or the ocean. Differences in materials, labelling and capabilities of composting facilities are making it difficult for the system to function properly.

Considering the New Zealand government’s intention to transition to a low-carbon economy and zero waste initiatives, the best answer to the problem is avoidance. Under the premise of convenience, we got used to a bag for everything, a plastic sleeve for a single slice of cheese or teabag, and a single-use plastic bottle for water. The production of all these containers contributes to carbon emissions as well as the later disposal.

In many cases, biodegradable plastic bags are made from crude oil, requiring carbon-based production processes and emitting carbon dioxide or methane when degrading. If we switch to no extra packaging, reusable containers made from metals or ceramics, and buy in bulk, then crude oil and gas can stay in the ground for a potential safe use by future generations.

Failing this, a second best option are products made from renewable materials. Here and in general, we have to insist on meaningful labelling with a clear pathway to deposition or recycling.

Many degradable plastics include additives, designed to make the product less durable. At the moment, the various additives and fillers are leading to contamination of waste streams. Expensive sorting or subsequent landfill might be the only alternative. Adequate recycling or re-manufacturing facilities would need to be created in New Zealand.

In his letter to Eugenie Sage, the associate minister for the environment, the PCE also refers to toxicity of plastics. More independent research is required in this area and the principle of caution should be applied in the meantime. In this day and age, there is no need to release a new material into general circulation, where the harmlessness is not investigated beyond doubt.

In some cases, a material may be banned in Europe but still readily available in the United States and Australasia. One example is BPA (bisphenol-A), which was banned in parts of Europe and some US states, but Australia announced a voluntary phase-out in baby bottles.

The banning of cosmetic products containing microbeads is another case in point. In the last few years, some countries, including the US, UK, France, Canada, Taiwan and Sweden, have proposed or implemented microbead bans. The US ban on microbeads in rinse-off cosmetics has been in place since July 2017, but while the Australian government endorsed a voluntary phase-out in 2016, there is no official ban. New Zealand implement its ban this June.

Consumer action and demand is a good start, with more and more of us changing our behaviour, leading by example, and asking industry to do likewise. A robust debate led by independent scientist should inform the public and authorities. Experiences like the ban of CFCs in the 1990s and New Zealand’s ban of microbeads are revealing to be ultimately successful. But they require regulatory intervention.

This can take the form of a ban of single-use plastics, which many countries have decided to exercise. Strengthening the standards framework is also required. At the moment, there is no overarching approach. Degradation in public waste facilities, in composting plants or in the sea is considered separately, as is toxicity.

A material should be assessed fully in all relevant environments and then appropriately labelled. The New Zealand government should work with industry towards product stewardship, where the whole product life cycle is taken into account in the design phase. This will bring us closer to a circular economy, in which we reuse and recycle far more products.