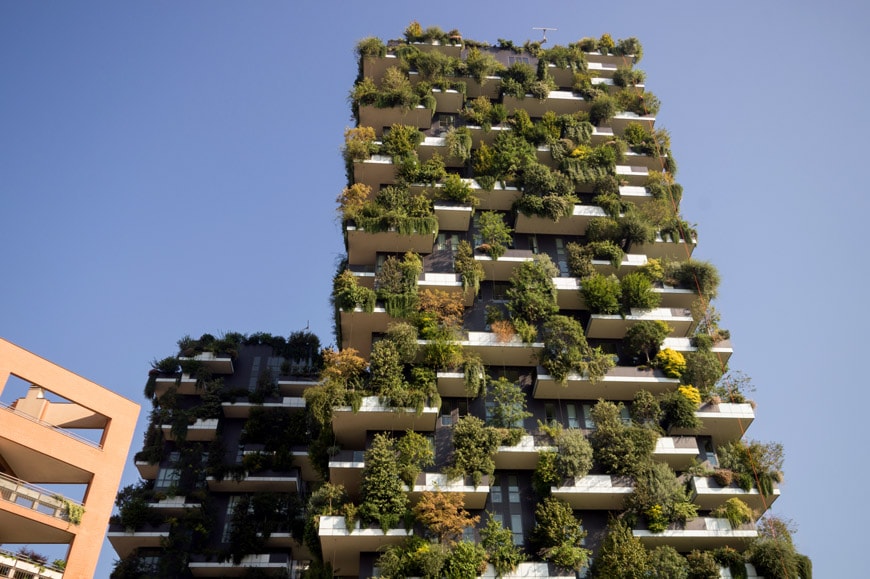 The Italian city of Milan has ambitious plans to plant three million new trees by 2030, a move that experts say could offer relief from the city’s muggy, sometimes tropical weather.

Some ad-hoc projects have already contributed to environmental improvements.  Projects like architect Stefano Boeri’s striking Vertical Forest residential towers, completed in 2014 near the Garibaldi train station, aim to improve not only air quality but the quality of life for Milan residents.  Mr Boeri created a small island of greenery in the heart of Milan, his pair of high-rises brimming from every balcony with shrubs and trees that absorb carbon dioxide and PM10 particles, a pollutant with links to respiratory ailments and cancer.  “I think the theme of forestation is one of the big challenges that we have today. It is one of the most effective ways we have to fight climate change, because it is like fighting the enemy on its own field,” Mr Boeri said.  “It is effective and it is also democratic, because everyone can plant trees.”

The UN climate summit taking place now in Poland has urged cities and regions to help achieve the goals of the 2015 Paris Agreement on curbing global warming, which include limiting the increase in the planet’s temperature to 2C (3.6F) this century.  Also, the World Economic Forum’s global agenda council has put extending the tree canopy among its top urban initiatives, recognising that small-scale changes can have a major impact on urban areas.  It included helping to lower city temperatures, creating more comfortable microclimates and mitigating air pollution.

Milan officials estimate the program to boost the number of trees by 30% in the broader metropolitan area will absorb an additional five million tons of carbon dioxide a year, four-fifths of the total produced by Milan, and reduce harmful PM10 small particulates by 3,000 tons over a decade.

Significantly, it would also reduce temperatures in the city by 2C, they say.  Mr Boeri said the current green canopy of the Lombard region’s capital is just 7% of the urban area.  That is well below northern European cities like Germany’s Frankfurt at 21.5% or Amsterdam at nearly 21%. It was closer to Paris at nearly 9%, according to the World Economic Forum’s Green View Index and the French capital itself has been battling for years to fight rising air pollution.

Damiano Di Simine, the scientific coordinator in Lombardy for the environmental group Legambiente, said potentially the biggest impact of the green Milan project will be to lower temperatures in a city where the nighttime temperature can be 6C (10.8F) higher than in the surrounding area.

City statistics show that Milan endures 35 tropical nights a year.  Because it lies close to the Alps, Milan sees very little wind to clear pollutants that become blocked in by temperature inversions, where a layer of cool air is covered by a layer of warmer air.  “The lack of wind also accentuates the urban heating,” Mr Di Simine said.  “It means the discomfort from thermic inversions is terrible, because the climate is very stationary.  “Planting trees will help this.”

The Vertical Forest has attracted more than 20 species of birds, which Mr Boeri said they did not expect.  And the shade provided by the 800 trees, 4,500 shrubs and 15,000 plants mean that the residents rarely have to put on air conditioning, even during the peak of Milan’s clammy summers.  The Vertical Forest’s total greenery has the capacity to absorb 30 metric tons of carbon dioxide every year, Mr Boeri said.  “There are also other advantages that are less measurable but I believe that the presence of green and trees has a very important effect on health and psychological state of mind, as it has been proved,” said Mr Boeri.