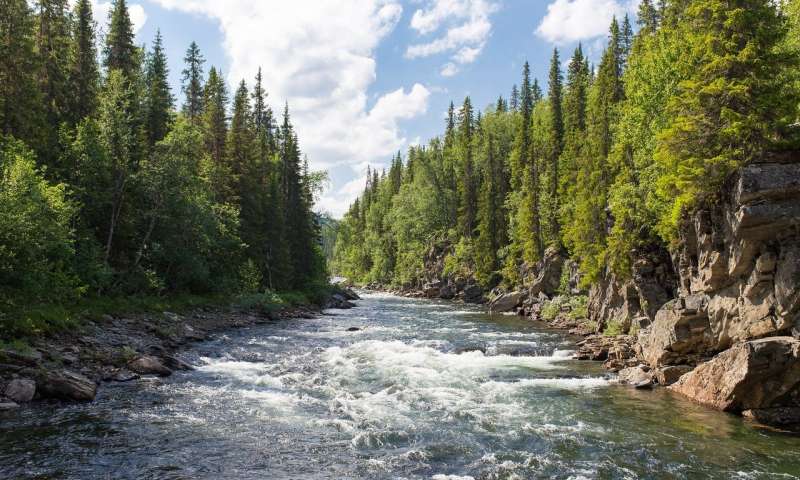 A study led by researchers at Université de Montréal quantifies for the first time the maximum amount of nutrients—specifically, phosphorus—that can accumulate in a watershed before additional pollution is discharged into downriver ecosystems.  That average threshold amount is 2.1 tonnes per square kilometre of land, the researchers estimate in their study published today in Nature Geoscience. “Beyond this, further phosphorus inputs to watersheds cause a significant acceleration of (phosphorus) loss in runoff.”

This amount is shockingly low, the researchers say; given current nutrient application rates in most agricultural watersheds around the world, tipping points in some cases could be reached in less than a decade.  The study was led by Jean-Olivier Goyette, a doctoral student in biology at UdeM, and supervised by UdeM aquatic ecosystem ecologist Roxane Maranger in collaboration with sustainability scientist Elena Bennett at McGill University.  Phosphorus, an element in fertilizer, is essential to the growth of plant food. But the mineral is also harmful when overused. When it gets into surface water, it can lead to excessive plant growth in lakes and rivers and proliferation of toxic algae, harmful to human and animal health.

Focusing on 23 watersheds feeding the St. Lawrence River in Quebec, the researchers reconstructed historic land-use practices in order to calculate how much phosphorus has accumulated on the land over the past century.  The two main sources of phosphorus to watersheds, the land adjacent to tributaries, come from agriculture (fertilizers and animal manure) and from the human population (through food needs and sewage).

Using Quebec government data, the researchers matched the estimated accumulation with phosphorus concentrations measured in the water for the last 26 years. Since the watersheds they studied had different histories—some had been used intensively for agriculture for decades whereas others were forested and pristine—this method allowed the researchers to establish a gradient of different phosphorus accumulations among sites. In so doing, they were able to see at what point the watershed “tipped” or reached a threshold and began to leak considerably more phosphorus into the water.

“Think of the land as a sponge,” Maranger said. “After a while, sponges that absorb too much water will leak. In the case of phosphorus, the landscape absorbs it year after year after year, and after a while, its retention capacity is reduced. At that point historical phosphorus inputs contribute more to what reaches our water.”  Until now, no-one had been able to put a number to the amount of accumulated phosphorus at the watershed scale that’s needed to reach a tipping point in terms of accelerating the amount of the mineral flowing into the aquatic ecosystem.

“This is a very important finding,” Bennett said. “It takes our farm-scale knowledge of fertilizers and pollution and scales it up to understand how whole watersheds respond within a historical context.”  Agriculture on a mass scale began in Quebec only in the 1950s, but some of the province’s more historical agricultural watersheds had already passed the tipping point by the 1920s, the study found.

Even if phosphorus inputs ceased immediately, eliminating the accumulated phosphorus in saturated Quebec watersheds would take between 100 and 2,000 years, the researchers estimate.  In some countries, including China, Canada, and the US, phosphorus is so heavily used now that the saturation point is reached in as little as five years.

“One possible mitigating measure would be to do what is already being done in some European countries: instead of adding more and more to help plants grow, phosphorus already stored in soils can be accessed using new practices and approaches,” Goyette said.  “Furthermore, phosphorus can be recycled and reused as fertilizer rather than accessing more of the raw mined material.”  The dilemma is this: humans need to eat but need to have clean water, yet growing food requires phosphorus that pollutes the water when too much leaves the watershed and pollutes adjacent aquatic ecosystems.