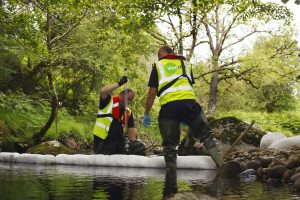 What is the future for monitoring Europe’s surface waters? New study assesses effectiveness and results from Water Framework Directive data

A new large-scale study of data from over 8000 sites across 31 European countries has found that the monitoring of water quality and ecological risks has improved over time (from 2001 to 2015), but the water condition itself has worsened. The findings indicate an increasing chemical pressure from organic compounds on Europe’s water bodies — with pesticides as the main driver of risk for ecosystem damage and biodiversity loss.

The study suggests that the minimal obligations for monitoring set out in the EU’s Water Framework Directive may need to be revisited, and there is a need for the reporting frequency of data quality to be harmonised across countries.

Due to the large number of chemicals currently being used, distributed or sold in Europe there is a risk that surface waters and their ecosystems are being exposed to many of these chemicals  as well as degradation products created from their reactions in the environment (which can be more ecotoxic than the parent chemical). In 2000, the Water Framework Directive was adopted, requiring Member States to assess the condition of their surface waters as a means to achieve good ecological and chemical status.

Since then more than 33 million water-quality-related records have been voluntarily submitted and amalgamated into the Water Information System for Europe – Water Quality database version 6 (WISE6) – published in July 2020. Amongst these are multiple factors relating to the chemical status of the water.

This study used data from WISE6 and focused on organic compounds (those which contain carbon bonded to hydrogen), identifying 352 organic contaminants at the 8 209 sites. Researchers found that out of the 238 contaminants which had data for more than five years, nearly a quarter (58) showed a significant increase in concentration over time, while only 3% showed a significant decrease in concentration. Improvement in monitoring was only marginally responsible for these trends, according to the research.

Toxic effects of 11 classes of organic chemicals were assessed using existing ecotoxicological test data to calculate the regulatory threshold levels (RTLs) for aquatic invertebrates, fish and aquatic plants. RTLs describe the levels or concentrations at which chemicals present an unacceptable risk for aquatic species groups so that, when they are exceeded, there is likely to be damage to the ecosystem and biodiversity loss. The surface water in over a third (35.7%) of sites exceeded at least one of the RTLs each year and average risks for both fish and aquatic invertebrates increased significantly over time . These risks were posed mainly by insecticides (56.5%), herbicides (27.4%) and industrial chemicals (10.9%). No short-term risk was identified for pharmaceuticals but toxicity data is sparse for these chemicals and there are concerns about their long-term presence and resulting chronic exposures.

The researchers also provided a basis to compare the quantity and quality of monitoring schemes in different countries in the form of a monitoring-quality index, which incorporated factors such as sampling frequency, continuity of monitoring over time and the number of chemicals monitored.

Quality of monitoring was highly variable among European countries3 , according to the study, but monitoring-quality indexes uniformly increased over time, suggesting that countries have generally improved their monitoring metrics from 2001 to 2015. According to the researchers, this diversity in quality of data is likely to mean that short-lived peaks of exposure are often missed which results in an underestimation of the risks to aquatic species.

The Water Framework Directive remains one of the most ambitious environmental policies, and this study highlights where monitoring schemes could be expanded, improved and integrated in order to enable more comprehensive and informative risk analyses for European water bodies.