Verde Environmental Consultants & Oil Leak Clean Up Specialists What is mica and why are people protesting over it? | Verde - Complete Environmental Solutions 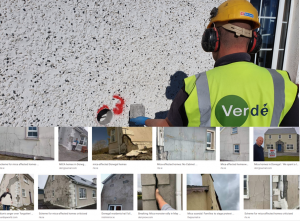 What is mica and why are people protesting over it?

A protest took place on Tuesday while the Dáil sat at Dublin’s Convention Centre calling for a mica redress scheme for thousands of homeowners in the northwest. What is the controversy about?

And what is the issue with this mica?

Muscovite mica has led to apparent defects in building blocks used in at least 5,000 homes in the northwest, causing cracks to open up in thousands of buildings. Videos posted online show load-bearing blocks crumbling in homeowners’ hands.

How does this happen?

From experiences recounted by the Mica Action Group and the Report of the Expert Panel on Concrete Blocks published in 2017, it seems mica attracts moisture from the environment, with external walls in some cases absorbing moisture from the ground like a sponge. The presence of mica affects the strength of the blocks and they eventually crumble, seemingly after about five years.

Why are only some blocks affected?

Is this the same as pyrite, which caused problems with homes in Leinster?

For practical purposes it is similar. Pyrite or Iron pyrite (FeS2) is a common mineral found in sedimentary and low grade metamorphic rocks.

Walls get web-like cracking, crumbling blocks and plaster cracks, which in the early days looks like minor subsidence or “settling”. But over time many homes have vertical cracks close to the corners that extend from ground to roof.

How can this happen?

Statutory Instrument number 288 of 1949 set a 1 per cent at total limit for impurities such as pyrite and mica in concrete blocks. The Expert Panel on Concrete Blocks consulted the National Standards Authority on this for its 2017 report to government. The clear view of the authority – and expert panel – was that the 1 per cent limit still applies.

The structural engineer first carries out a survey of the property and identifies sample locations for testing. They then engage Verde Remediation Services to undertake:

This report forms an integral part of the application for funding under the Government scheme.

If you are worried about possible pyrite or mica damage at your property, an Overview of Defective Concrete Blocks Grant Scheme can be viewed here or on the Mayo County Council and Donegal County Council websites.

Cost of pyrite remediation scheme to hit €150m by year-end

What to look out for when buying your new home…is there an oil tank on site?

‘We’re no different to anyone else affected by it, we didn’t cause it, we can’t cure it, so we need help.’ Sligo’s growing pyrite disaster

Mayo pyrite houses to be demolished and rebuilt

Pyrite home owners fear being pushed out of repair scheme