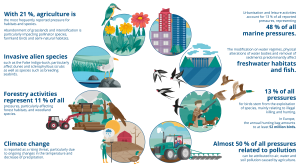 What is harming Europe’s nature?

European nature is suffering the consequences of long-term exploitation and pollution. Nature keeps providing us with food, clothes, medicines, housing, energy and other resources, but ecosystems and many plants and animals are in decline, sometimes being pushed to extinction. What are the human activities that harm nature the most and how can we stop and reverse current biodiversity loss?  We humans are the species that has changed the Earth like no other species. We have had a major impact on almost all other species that share the planet with us and on their habitats. Europe, as one of the most densely populated areas on Earth, is no exception.

Almost 40 % of the EU’s land is used for growing food, according to Eurostat. While traditional agriculture allowed a diverse range of animals and plants to coexist with crops, changes in agricultural practices since 1950, in the direction of intensification and specialisation, have contributed to a high degree of biodiversity loss. According to the EEA’s State of nature in the EU report, the increased use of fertilisers, irrigation and pesticides and the intense modification of the land are key pressures on local animals and plants, and especially on birds.

Pollution by pesticides used in agriculture is the main cause of the worrying decline in the number of insect-eating birds and farmland birds.

One of the most important pressures is the ceasing of traditional grassland management. Pollinators, such as bees, bumblebees and butterflies, are highly affected by it. Fragmentation of the land and drainage, for agricultural purposes, destroy the habitats where birds, reptiles and small mammals used to feed, find shelter and breed.

Pollution of water, air and soil

We often link pollution to industry, transport and energy production, which are important sources, but almost 50 % of the pressures on nature related to pollution come from agricultural emissions to air, water and soil. Pollution by pesticides used in agriculture is the main cause of the worrying decline in the number of insect-eating birds and farmland birds. Pesticide pollution also affects amphibians, such as frogs, toads and salamanders, insects and small mammals, including bats, hamsters and the European ground squirrel.

Similarly, pesticides and fertilisers have negatively affected about 80 % of the 576 butterfly species that live in Europe. Agriculture is also a major source of pollution for surface water and for groundwaters, affecting many ecosystems.

Pollution from agriculture is one of the main problems to be tackled by the EU biodiversity strategy for 2030 and the EU’s farm to fork strategy, which aims to reduce the use of chemical pesticides by half and to promote less intensive farming practices, including at least a 20 % reduction in fertiliser use.

Urbanisation is another serious pressure on nature, but, perhaps surprisingly, most of the damage no longer comes from converting nature areas to urban territory (11 % of the pressures in this field, according to the EEA’s State of nature in the EU) but instead from sports, tourism and leisure activities (25 % of urban pressures). However, construction and modification within urban areas also affect many species that are used to living in urban habitats (accounting for about 10 % of urban pressures).  Moreover, roads, railways, dams and other infrastructure also fragment habitats and destroy landscapes. Traffic disturbs and kills wildlife. Soils, as important reservoirs of biodiversity, are damaged when they are sealed with buildings, asphalt or concrete.

Much of the European coastline is modified for tourism, leaving little space for intact marine and coastal habitats. Water birds, such as ducks, geese, herons and grebes, and threatened raptors, such as the Egyptian vulture and the bearded vulture, are severely affected when their nesting areas are destroyed.

Almost all of Europe’s forests have been transformed by human interventions. Even after reforestation, the nature of human-managed forests is different. For example, the habitat can be negatively affected if there are fewer trees of different species and ages.

Despite all the protection measures, we still see local deforestation and clearcutting without new trees being planted in Europe.

The removal of dead and old trees and the reduction in old-growth forests affects many species of insects, birds, amphibians, reptiles, bats and small mammals, such as the western barbastelle, the Caucasian squirrel and the forest dormouse. Despite all the protection measures, we still see local deforestation and clearcutting  without new trees being planted in Europe.  At least 52 million wild birds are hunted by humans every year in Europe, according to research that covers 26 European countries. Moreover, illegal killing is threatening many species, particularly birds and mammals, while feral and free-ranging cats and dogs present an additional threat.

Fish are affected by harvesting, as are marine mammals, such as the short-beaked common dolphin and the harbour porpoise, which sometimes fall prey to bycatch.

Even when we try to enjoy nature, we may unwillingly harm habitats and species around us. Many recreational activities, such as outdoor sports, leisure aircraft, drones, human trampling and unregulated wildlife watching, can be very damaging to nature.

Aliens are taking over

Sometimes intentionally, sometimes by accident, Europeans have brought new plants and animal species to the continent. These new species are sometimes taking over habitats and disturbing ecosystems, which is why they are called invasive alien species.  Some of the most damaging invasive aliens are American mink, coypu and raccoon, which have become predators of European birds, and Reeves′s muntjac, which browses understory habitats. The comb jellyfish, first introduced into the Black Sea through ships’ ballast water, has devastated certain fish populations.

There are also alien species of plants that are taking over from local ones. False indigo-bush, Japanese knotweed and Himalayan balsam are just some examples.

Climate change is already affecting life in Europe, with increased temperatures, droughts, changes in rain patterns, wildfires and less snow. It is seen as an emerging threat to European species, and it will affect more and more animals and plants.  We are witnessing local and regional extinctions of species, as well as a move of the species northwards and uphill. Amphibians, birds and bats are the most affected species by droughts and changes in rain patterns.  The EEA’s European environment — state and outlook 2020 report warned that ocean warming, acidification and deoxygenation continue to worsen, endangering marine habitats.

To mitigate climate change, we need to produce energy in a sustainable way. Europe is leading the efforts towards decarbonisation, aiming to be carbon neutral by 2050. This is a critical goal but, in some cases, development of renewable energy can harm habitats and species. For example, wind turbines can create a threat to bats and birds, which can collide with the blades, and dams can block the passage of sediments and migratory fish. It is crucial, therefore, that all measures towards decarbonisation are taken in a coordinated manner with biodiversity policies, to minimise the impacts on animals and habitats. There are many good solutions that benefit both climate and nature, such as improving the state of soils.

The factors described above are the most serious pressures on nature, in Europe, but they are not the only ones. Noise and light pollution coming from human activity also harm many species. There are many issues to tackle, but what is clear is that humans must learn again how to give space for nature to thrive. Failing to do so urgently could have consequences we cannot reverse.