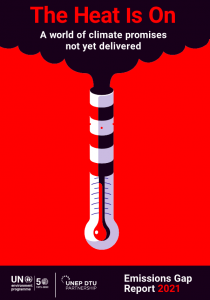 The world is in ‘imminent peril’ as plans to cut emissions will fall far short of what is needed to stop the disastrous effects of global warming, the UN Emissions Gap 2021 report has warned.  The dire warning comes as the Government’s chief environmental adviser said we need to take a ‘very serious’ look at reducing our huge number of methane-producing cows in a bid to curb global warming.  Marie Donnelly, chairwoman of Ireland’s Climate Change Advisory Council, said our national herd ‘is very large – more than our population of people’. She said it’s a problem we are going to have to look at ‘very seriously’.

The UN Environment Programme (UNEP) on Tuesday released a report showing that, even under current climate pledges from countries to cut greenhouse gases in the next decade, the world still faces a 2.7C temperature rise by 2100 – something that could be catastrophic for the planet.  Released days before world leaders meet in Glasgow for crucial COP26 climate talks this weekend, the report revealed that plans to tackle emissions by 2030 only reduce predicted planet-warming pollution by 7.5% by 2030.  Reductions of 55% are needed to meet the goal to limit global temperature rises to 1.5C – beyond which more severe impacts of climate change will be felt, from extreme weather to rising seas.

On Monday, Ireland’s Climate Change Advisory Council, of which Ms Donnelly is chair, outlined proposals to cut emissions by more than 50% by the end of the decade. It signed off on two five-year carbon budget plans to achieve a 51% reduction by 2030.  The budgets are part of the long-term strategy to make Ireland carbon-neutral by 2050. The plans are now set to be taken to Cabinet by Environment Minister Eamon Ryan.

However, the UN warned on Tuesday that it may all be too late.

The impact of new plans will reduce global greenhouse gas emissions by just 2.9billion tonnes in 2030.  Emissions need to be reduced by another 28billion tonnes in 2030 to keep the world on a path to keeping temperature rises to 1.5C – equivalent to nearly halving current levels of pollution of just under 60billion tonnes a year – on top of cuts already planned, the report said.

To limit temperature rises to 2C, emissions must be cut by an additional 13billion tonnes in 2030.

The report noted that some 49 countries and the European Union have pledged long-term targets to cut emissions to net zero, which could bring temperature rises down to 2.2C – but only if they are fully implemented, with action in the next decade, it said.  The report also highlighted that just a fifth of the recovery investment to help reboot economies after the pandemic had gone to supporting green measures – missing an opportunity to drive action to slash emissions.  It offers opportunities to cut emissions quickly, such as reducing the greenhouse gas methane with technology and changes to diet, it is claimed.

UNEP’s executive director Inger Andersen warned: ‘The world has to wake up to the imminent peril we face as a species. Climate change is no longer a future problem. It is a now problem.’

The latest annual analysis of the ‘emissions gap’ between what the action countries are planning and what is needed by 2030 shows that even with new or updated plans from 120 countries and the EU, as well as new pledges from key polluters such as China, far more needs to be done.

On Tuesday, Ms Donnelly told RTÉ Radio that agricultural pollution needs to be examined.  ‘Analyse the emissions coming from the agricultural sector and there are three kinds of gases,’ Ms Donnelly said.  ‘There’s carbon dioxide, the same as the rest of us – diesel and petrol in tractors. So that’s one area, clearly, that is the same for everybody in our society.  The secondary is nitrous oxide, which is a very long-lived, warming gas. And that’s coming from our fertiliser and our slurry. And this is not a new message. We have an issue there. Our water quality is being impaired by the run-off, and this is something that has already been tackled in the agriculture sector.  So it’s from a water purity perspective but also from an emissions perspective – we get a double benefit out of taking action in that space.’

She said that ‘methane, of course, comes from cattle and from sheep’, adding: ‘At the moment, our methane emissions are increasing, they’re going in the wrong direction. There are certain technology and feeding practices that can help that.  But we may have to deal with a very difficult issue of linking activity levels in agriculture to methane emissions, and addressing that as a serious challenge.’

On Tuesday, Sinn Féin TD Darren O’Rourke, the party’s spokesperson on climate action, said that the Government had failed to prepare the public for how transformational the next decade would be as the country responds to climate change.  Mr O’Rourke said that his party would not have increased the carbon tax, amid rising energy costs.  He said the debate on climate change can be ‘toxic’, partly because of the uncertainty about how the Government plans to reduce emissions.  The process that led to the devising of carbon budgets by the Climate Change Advisory Council had been a ‘missed opportunity’ to engage with the public, he said, adding that the world needs big thinking.  ‘The rulebook that exists, tax and nudge – the idea of sending signals to the market – won’t deliver on what is needed,’ Mr O’Rourke said.