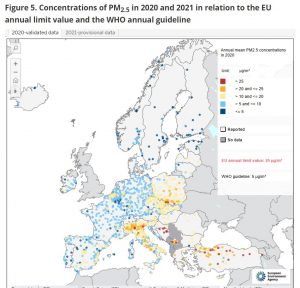 Despite a noticeable drop in air pollution from road transport in 2020 due to COVID-19 lockdown measures, breaches of European air quality standards remain a common occurrence across the European Union (EU), according to the EEA briefing ‘Europe’s air quality status 2022.’  The EEA briefing presents the latest official data for 2020, plus provisional data for 2021, on concentrations of key air pollutants measured at more than 4,500 monitoring stations across 37 European countries. The analysis focuses on those pollutants most harmful to human health, including particulate matter (PM2.5, PM10), nitrogen dioxide (NO2) ozone (O3) and benzo[a]pyrene, and assesses concentrations against EU air quality standards and WHO air quality guidelines.

Despite reductions in emissions, in 2020 most of the EU’s urban population was exposed to levels of key air pollutants that are damaging to health. Critically for health, 96% of the urban population was exposed to concentrations of fine particulate matter (PM2.5) above the WHO guideline of 5 µg/m3. In contrast, less than 1% of the urban population was exposed to PM2.5 concentrations above the EU annual limit value of 25 µg/m3, highlighting the discrepancy between current EU policy objectives and the scientific evidence on when health effects occur. Central-eastern Europe and Italy reported the highest concentrations of particulate matter and benzo[a]pyrene (a carcinogen), due primarily to the burning of solid fuels, like coal and wood, for domestic heating and the use of fossil fuels in industrial production.

Data shows that lockdown measures introduced in 2020 to stop or minimise the spread of COVID-19 led to reduced activity in the road transport, aviation and international shipping sectors, which in turn led to falls in emissions of air pollutants. NO2 levels fell as a direct result of reductions in road transport. In major cities in France, Italy and Spain, annual mean concentrations of NO2 fell by up to 25% in 2020, while in the month of April, concentrations fell by as much as 70% around roads normally busy with traffic. Nevertheless, 89% of the urban population was exposed to levels of NO2 above the WHO guideline.

Despite ongoing overall improvements in air quality, air pollution is still a major health concern for Europeans. Exposure to fine particulate matter causes cardiovascular disease, lung cancer and other diseases that lead to premature deaths. In some bigger cities, high concentrations of NO2 persist due to road traffic, with NO2 linked to asthma and breathing problems. Later this year, EEA will publish its official estimate of the impact of air pollution on human health in 2020.

Under the European Green Deal’s Zero Pollution Action Plan, the European Commission identified a number of actions to help address Europe’s air quality. This includes a revision of the ambient air quality directives, aiming, among other things, to align the EU air quality standards more closely with WHO recommendations.