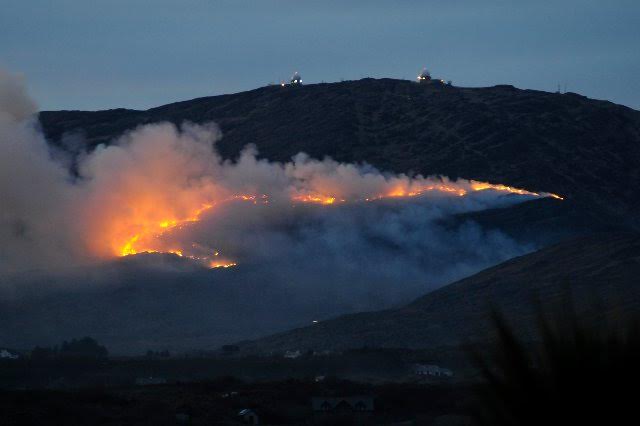 Gorse fires started in the Wicklow uplands during an exceptionally dry February are damaging to the environment and a threat to public safety, the Wicklow Upland Council (WUC) has said.

Since Monday a number of fires were identified at Hollywood, Bohernabreena, Kippure and Lacken, with the Irish Air Corps forced to deploy helicopters to tackle the flames.

WUC said that while cutting and burning vegetation by landowners is permitted in February, it is concerned with the manner in which the burnings have been carried out.  In a statement, the voluntary group said that some landowners are under a false impression that burning within the “permissive season” between September and February is “controlled”.  Fires ignited during unusually dry seasons such as this February should actually be considered “uncontrolled” and require close supervision, the WUC said.  “The unusually dry weather this week has seen a number of fires being lit around the uplands but in some cases these fires are not controlled and are damaging to the environment and a threat to public safety and property,” WUC said.  “Lighting the fire and walking away is not controlled and results in extensive environmental damage,” it added.

Earlier this week, Coillte Risk Manager Mick Power told Farm Ireland that human activity is almost always to blame for gorse fires in Ireland.  The Wildlife Act currently restricts burning during nesting and breeding seasons for birds and other wildlife from 1 March to 31 August. Last December, the Minister for Heritage Josepha Madigan TD opened a public consultation on regulations seeking to extend the burning season to include March.

The move prompted a public outcry with biodiversity experts voicing concern about the potential impact on breeding birds, particularly the endangered Curlew which begins its nesting activities in March.  Yesterday, however, Ms Madigan announced that she will not support the regulations as this year’s permissive season has been exceptionally dry.   Analysis of Met Eireann data by Ms Madigan’s department showed that the first two months of 2019 were “exceptionally dry” compared to average rainfall at almost 30 per cent below the 30 year average.   “Weather conditions would not have precluded landowners from burning vegetation during the six month period when this could have been done under the law and accordingly there is no basis for me to extend the legal period for burning into March,” Ms Madigan said.  The Minister said that an extension to allow burning would be irresponsible at this time due to the outbreak of a number of serious wildfires across Ireland in the past two weeks.