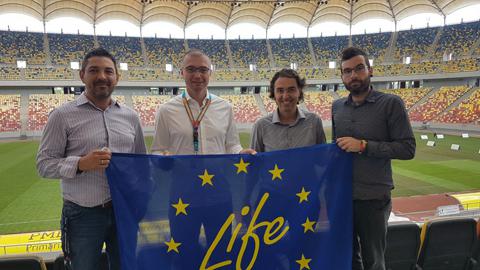 As the new football season kicks off around Europe, one LIFE project is looking to a new goal: to make football matches and stadiums more environmentally friendly and environmentally aware.

From food to water consumption, stadium power to choice of suppliers, air travel to waste management, avenues exist throughout football where environmentally-friendly choices can help the game become more sustainable.

LIFE TACKLE, run by the Institute of Management of Scuola Superiore Sant’Anna in Pisa, is working with stadiums around Europe to collect and test best practices on environmental management.  The 11 stadiums from seven countries include three which will host the Euro 2020 competition – the Aviva Stadium in Dublin, National Arena in Bucharest and the Olympic Stadium in Rome.

Tiberio Daddi, researcher from Scuola Superiore Sant’Anna, spoke to the LIFE team about the project’s work and how stadiums and football associations are welcoming the changes.

What’s the biggest success of the project so far?
We’re really excited about the level of interest from top-level, first division clubs. We now have 11 stadiums and many clubs from the first division in their national leagues, and are being contacted by others. Our support is really welcomed, especially from procurement managers, because green procurement is a fairly new issue for them.

This means that we have some big names on board, such as Real Betis, who are very committed to making their club more environmentally friendly.

What kind of changes are you looking for stadiums to make?
This depends on the ownership model. Sometimes the owner is the football club, such as in the case of Real Betis. Sometimes it’s the municipality, such as in the case of National Arena in Bucharest. Based on this, we look together at which actions they could implement from a list of our best practices collected during the pilot stage of the project.

So, for example, one of the focuses is catering. Clubs could host numerous people in their “hospitality area” at matches and have to manage a lot of organic waste. And a lot of snack food is consumed around stadiums. One thing we are doing is to help clubs reuse food that remains unused during the matches or which is nearing the end of its shelf life, but can be distributed elsewhere after matches.

Stadium seats are another opportunity. Plastic seats have to be replaced regularly, and many are replaced each year because of damage. All the seats need to meet strict standards set by UEFA, and also look good – clubs want their club colours to shine! Thanks to new impetus from LIFE Tackle, a waste management company that serves cities in Tuscany is suppling stadium seats made of around 30% recycled plastic for some of our participating stadiums. This is a good start considering the safety and quality requirements.

Other actions that we’re looking for include using recycled cups, separating waste collection, public transport to stadiums, and even composting.

Who are your first points of contact: stadiums, clubs or national football
associations?
The Italian, Romanian and Swedish Football Associations as partners of Life Tackle are our first point of contact toward the football world. Then we work with additional stakeholders in each stadium. For example in Italy, the National Football Association contacted the Italian Olympic Committee to be involved in Tackle. They own the Olympic Stadium which is one of the stadiums which is part of LIFE Tackle, as well as will be one of the Euro 2020 stadiums.

In Bucharest, the Romanian Football Association involved the city municipality which owns the national stadium there.

In Dublin, contact with the stadium came via UEFA who are supporting the project.

What are your goals for the longer term?
It is quite early days in the project, but Euro 2020 is a big opportunity for both national and the European football associations to make the sport greener. At the beginning of 2020, ahead of the start of the competition later that year, UEFA are going to officially adopt LIFE Tackle’s guidelines on environmental management of football events. These will list around 90 different topics on issues like mobility, energy and waste management, water consumption and environmental governance, including green procurement.

As part of our project, we also focus strongly on governance and clubs’ or stadiums’ internal processes. What we are finding is that we can help managers to understand better the kinds of data they should be collecting – on water or energy consumption, for example. This means they have better KPIs to make long-term improvements.

Finally, thanks to our project so far, future sport events could take on board the results of LIFE Tackle such as the World Cup 2022, Euro 2024 and the 2026 Winter Olympic Games which will be hosted in Italy.

About green procurement
Encouraging more sustainable buying practices from environmentally-friendly suppliers, a process known as green procurement, is one of the tools to make Europe’s sporting and cultural sectors, as well as public authorities, greener. Similar standards for summer festivals are being developed by another project in Italy – LIFE GreenFEST.