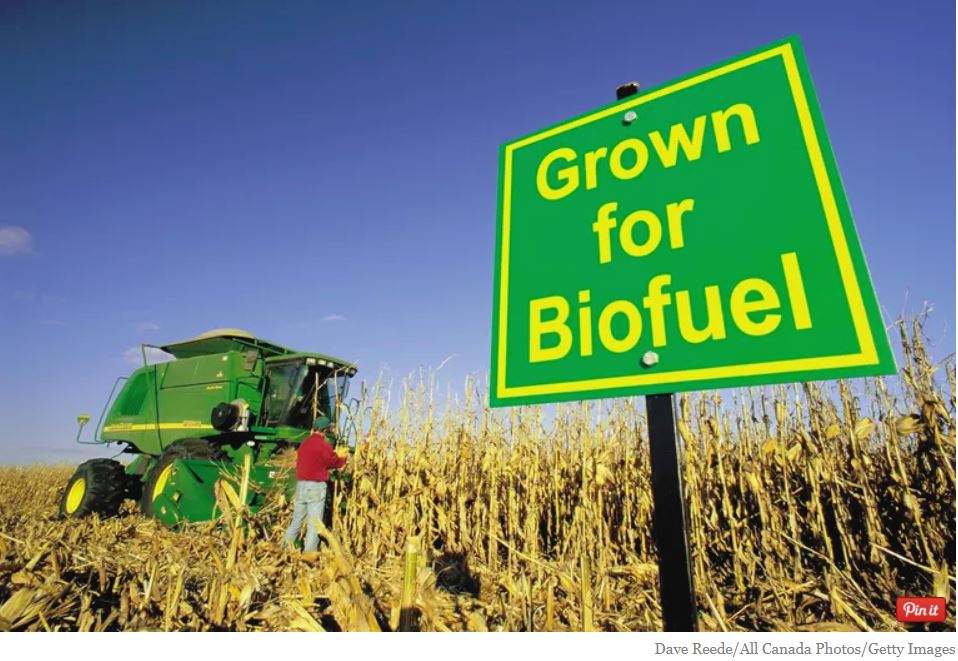 Earlier this year, the European Commission issued cautionary notices to a number of Member States relating to their failure to fully transpose EU rules contained in Directive (EU) 2015/1513. These rules govern the quality of petrol and diesel fuels and the promotion of the use of energy from renewable sources. The Directive aims to reduce the risk of indirect land-use change linked with biofuel production. Indirect land-use change occurs when agricultural land previously used for growing food or feed crops starts to be used for growing biofuel crops instead. This has implications for greenhouse gas emissions because it results in increased pressure to use other (unused) land to grow food and feed in order to meet the demand for food and feed. The Directive also prepares for the transition towards advanced biofuels which are produced from materials such as waste and residues.

Directive 2009/28/EC (Renewable Energy Directive) directs that each Member State must ensure that the share of energy from renewable sources in all forms of transport in 2020 is at least 10 % of the final consumption of energy in transport in that Member State. The blending of biofuels is one of the methods available for Member States to meet this target, and is expected to be the main contributor. The Renewable Energy Directive objectivises energy efficiency in the transport sector. This is important because a mandatory percentage target for energy from renewable sources is likely to become increasingly difficult to achieve if overall demand for energy for transport continues to rise.

In order to further reduce greenhouse gas emissions and the significant contribution that road transport fuels make to those emissions, Directive 98/70/EC (Fuel Quality Directive), requires suppliers of fuel or energy to reduce greenhouse gas emissions per unit of energy of fuels used in the Union by road vehicles, non-road mobile machinery, agricultural and forestry tractors and recreational craft (when not at sea) by at least 6% by 31 December 2020.

The blending of biofuels is one of the methods available for fossil fuel suppliers to reduce the greenhouse gas intensity of the fossil fuels supplied.

While biofuels are important in helping the EU meet its greenhouse gas reductions targets, biofuel production typically takes place on cropland which was previously used for other agriculture such as growing food or feed. Since this agricultural production is still necessary, it may be partly displaced to previously non-cropland such as grasslands and forests. This process is known as indirect land use change (ILUC). ILUC risks negating the greenhouse gas savings that result from increased biofuels because grasslands and forests typically absorb high levels of CO2. By converting these land types to cropland, atmospheric CO2 levels may increase.

Criteria for biofuels and bioliquids production

The Renewable Energy Directive sets out sustainability criteria with which biofuels and bioliquids need to comply in order to be counted towards the targets in that Directive and to qualify for inclusion in public support schemes. The criteria include requirements on the minimum greenhouse gas emission savings that biofuels and bioliquids need to achieve compared to fossil fuels. Identical sustainability criteria for biofuels are set out in Directive 98/70/EC.

The Renewable Energy Directive and Fuel Quality Directive together introduced new rules in 2015 which amended the previous legislation on biofuels in order to reduce the risk of indirect land use change and to prepare the transition towards advanced biofuels. Some of these rules are as follows:

Failure to transpose the EU rules

The European Commission decided to send reasoned opinions to Germany and Latvia, and letters of formal notice to Finland, France, Ireland, and Czechia for failing to fully transpose EU rules on the quality of petrol and diesel fuels and the promotion of the use of energy from renewable sources in accordance with Directive (EU) 2015/1513.

The Member States concerned now have two months to reply to the concerns raised by the Commission. If the Commission does receive favourable responses it may decide to proceed to the next stage of the infringement process, including referral to the Court of Justice of the EU for reasoned opinions.

The infringements procedure comprises several stages and is set out formally in Article 258 of the Treaty on the Functioning of the European Union (TFEU). The Court of Justice of the EU (CJEU) has recognised that the Commission has discretionary powers in this area. For example, it may consider that there is sufficient evidence of a breach of Community environmental law, but that legal enforcement action may not be appropriate or necessary if the Member State has undertaken to remedy the breach. If the CJEU finds a Member State to be in breach of Community environmental law, the Member State concerned must then take the measures necessary to comply with the judgment of the CJEU.

A reasoned opinion is a crucial document which sets out the complaint to which the Member State must respond to. The issuance of a reasoned opinion forms an important part of the pre-judicial procedure under Article 258 of TFEU. Together, with the letter of formal notice, the reasoned opinion sets out the substance of the formal complaint against a member state and provides a time period within which the infringement must be remedied. This follows the idea in EU law that it is of fundamental importance to provide reasons and is considered to be an essential procedural requirement. When deciding whether a Member State has infringed EU law, the Commission only needs to consider whether that Member State has failed to fulfil an obligation under the Treaties, which can include actions as well as omissions including failure to implement Directives which is a common subject of infringement proceedings.

The European Commission is not obliged to indicate what steps should be taken by the Member State to remedy the infringement, but merely set out the grounds on which it has relied in concluding that the Member State has erred and indeed set out the particular complaints that will form the basis of proceedings against that Member State. The Commission is also not entitled to amend the substantive content of its submission when the case is heard before the Court nor include a new objection after the reasoned opinion has been issued.

It is important to note also that the reasoned opinion is a confidential document and is sent directly to the Member State. A complainant has yet to be successful in its application to seek disclosure of a reasoned opinion, even where a period of time has elapsed after the closure of an investigation.

It is unclear as to the extent to which the accused Member States are at fault in respect of the infringement of the indirect land use change legislation. The reasoned opinion and formal warning letters are not publicly accessible. We must, therefore, wait to see the outcome of these official warnings and what impact any resulting proceedings may have on other Member States with large agriculture land sites, such as Ireland.

If Ireland does not take steps to remedy its infringement, proceedings may be taken against the State. This in turn will have knock on effects for businesses in Ireland that may be obliged to change the type of fuel used in carrying out their activities in the state in order to comply with the Directive, and with little visibility on what type of fuel will be available to use instead, this could end up being more expensive than using current readily available types of fuel.