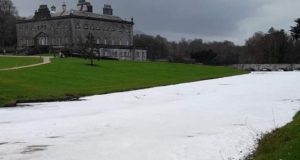 An incident in which the Carrowbeg river in Westport, Co Mayo was turned white with foam from suspected detergent, is being investigated by Inland Fisheries Ireland.  No major fish kills have been reported but the incident has prompted the fisheries body, which operates under the remit of the Department of Environment, Climate and Communication, to launch an appeal for the public to take care and “be aware of the environmental risk posed to waterbodies”.

The pollution, which occurred last weekend, was traced to a local landowner who was said to be working with the fisheries body and Mayo County Council to contain the damage. Inland Fisheries Ireland said its “staff responded to the report of an accidental detergent discharge into the Carrowbeg river on Saturday afternoon”. It is understood a number people reported seeing the river turn into a white foaming flood. The fisheries body said in addition to calls to its hotline number, it was contacted by the landowner where the pollution occurred.  Photographs taken by locals show the river flowing white past Westport House and into Westport Harbour on Saturday.

Fisheries staff said they worked with the landowner to carry out immediate remedial works. Measures were undertaken to ensure there would be no further discharge, and monitoring of the site continued with drone surveys of the catchment area as well as physical inspections on water and on ground. Samples of the affected water were taken by Mayo County Council’s environmental section for analysis.

The Carrowbeg river is the main river that runs through Westport town. The river has an abundant indigenous brown trout population and is an important amenity as well as being a well-known tourist attraction which features strongly in the town’s recent successes in the annual Tidy Towns Competition.

Patrick Gorman, Galway director at the Western River Basin District of Inland Fisheries Ireland, said the body urged the public “to be aware of the environmental risk posed to their local waterbodies should such discharges be made into road or car park drain networks”.

Verde Remediation Services provide emergency response services to mitigate impact as response time is critical to reducing the risk associated with an incident.

Getting the right technical and legislative advice is also essential to avoid any costly mistakes.

If you have an environmental emergency, contact us directly at 1890 20 10 20 and we can mobilise an Emergency Response Team immediately.