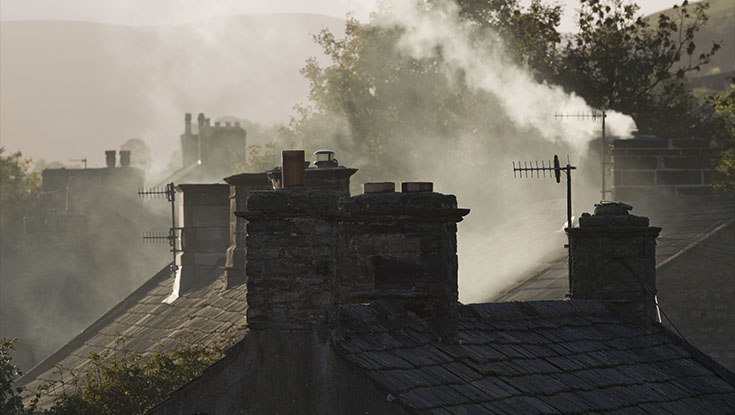 Fuels like wood and peat, that are supposed to be cleaner for the environment than coal, are still causing severe air pollution, a new study from NUI Galway has found.  This air pollution study was led researchers from NUIG’s School of Physics and the Ryan Institute’s Centre for Climate and Air Pollution Studies.  It found that during a three month period from November 2016 to January 2017 the air pollution levels in Dublin breached World Health Organisation guidelines every one in five days. The research team, which was headed by NUI Galway‘s  Dr Jurgita Ovadnevaite, deployed a never before used air pollution network, AEROSOURCE, that uses next-gen pollution fingerprinting technology to identify the source of even the smallest amount of air pollution.

It found that despite only accounting for a small percentage of homes using them as a primary fuel source, peat and wood burning accounted for 70% of “extraordinarily high pollution levels.

Professor Colin O’Dowd, Director of NUI Galway’s Centre for Climate and Air Pollution Studies, said: “The disproportionate sensitivity of air pollution levels to solid fuel, including climate-friendly ‘low-carbon’ solid biomass fuel is quite concerning.  Since fuels like wood are one of the most popular choices of ‘low carbon’ biomass fuel and consumption of this fuel type is set to double across Europe by 2020, and to triple globally by 2030,” he said.  “The results from this study suggest that along with promoting low-carbon or carbon-neutral solid fuels, it is especially important to fully consider the health impact from any associated air pollution emission.”

The study found that during the main emission period of these events, usually in late evenings, the hourly levels were frequently ten times higher than the WHO’s Average Quality Guideline.  The AQG is more strict than the regulatory levels imposed by governments, but is still not regarded as a safe level since adverse health effects can occur well below that threshold.  No matter what the timescale of these events, the study found that it was wood or peat that was driving levels up rather than coal or oil.

In fact, the recorded impact of coal on air quality was strikingly low, showing the successful impact of the Smoky Coal Ban, first introduced in Dublin in 1990, which has since spread to many areas and will go nationwide next year.  Professor O’Dowd added, “These striking results also illustrate the importance of considering the wider impacts of climate policy to avoid negative health impacts, as occurred with diesel vehicles, and ensure positive co-benefits and win-win outcomes, so that actions to mitigate against climate change benefit air quality and vice versa.”

The EU is currently reviewing its Clean Air For Europe Directive with the goal of delivering a a 7th Environment Action Plan that would adopt WHO air quality guidelines by 2020.