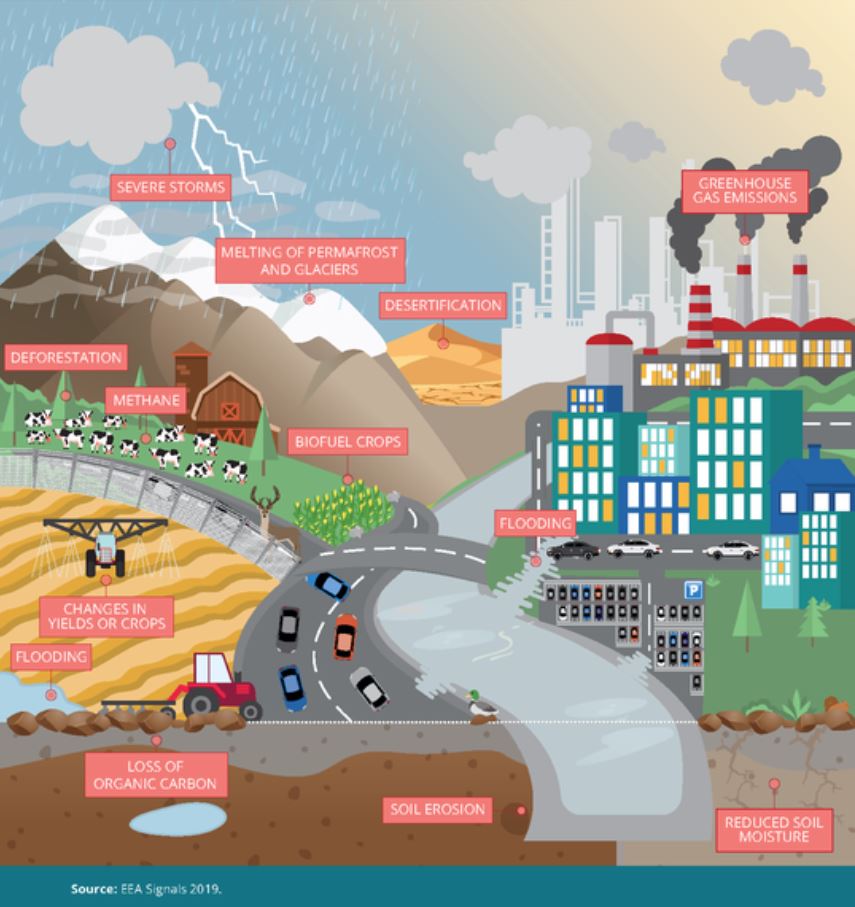 Climate change has a major impact on soil, and changes in land use and soil can either accelerate or slow down climate change. Without healthier soils and a sustainable land and soil management, we cannot tackle the climate crisis, produce enough food and adapt to a changing climate. The answer might lie in preserving and restoring key ecosystems and letting nature capture carbon from the atmosphere.

The Food and Agriculture Organization of the United Nations (FAO) recently released a map showing that the top 30 cm of the world’s soil contains about twice as much carbon as the entire atmosphere. After oceans, soil is the second largest natural carbon sink, surpassing forests and other vegetation in its capacity to capture carbon dioxide from air. These facts remind us how important healthy soils are, not just for our food production but also for our efforts to prevent the worst effects of climate change.

Researchers can already see the effects of climate change globally and in European soil. For example, according to the EEA’s most recent report on climate change, impacts and vulnerability in Europe, soil moisture has significantly decreased in the Mediterranean region and increased in parts of northern Europe since the 1950s. The report projects similar effects for the coming decades, as the rise in average temperatures continues and rainfall patterns change.

Continuing declines in soil moisture can increase the need for irrigation in agriculture and lead to smaller yields and even desertification, with potentially dramatic impacts on food production. A total of 13 EU Member States have declared that they are affected by desertification. Despite this acknowledgement, a recent report by the European Court of Auditors concluded that Europe does not have a clear picture of the challenges linked to desertification and land degradation and that the steps taken to combat desertification lack coherence.

Changes in seasonal temperatures can also shift the annual cycles of plants and animals, resulting in lower yields. For example, spring can arrive earlier and trees can blossom before their pollinators have hatched. With the expected population growth, world food production needs to increase rather than decrease. This hinges largely on maintaining healthy soil and managing agricultural areas sustainably. At the same time, there is a growing demand for biofuels and other plant-based products, driven by the urgent need to replace fossil fuels and prevent greenhouse gas emissions.

The EEA report on impacts and vulnerability also highlights other impacts on soil related to climate change, including erosion, which can be accelerated by extreme climate events, such as intense rain, drought, heat waves and storms. In addition to causing the loss of areas of land, rising sea levels may change soil in coastal areas or bring contaminants, including salt, from the sea. In relation to land use, climate change may make some agricultural areas, mainly in the south, unusable or less productive while possibly opening up new possibilities further north. In forestry, the decline in economically valuable tree species might cut the value of forest land in Europe by between 14 and 50 % by 2100. A recent EEA report on climate change adaptation and agriculture highlights that the overall impacts of climate change could produce a significant loss for the  European agricultural sector: up to 16 % loss in EU agriculture income by 2050, with large regional variations.

Yet perhaps the biggest climate concern linked to soil is the carbon dioxide and methane stored in permafrost in boreal regions, mainly in Siberia. As the global temperatures increase, the permafrost melts. This thawing causes the organic material trapped in the frozen soil to disintegrate, which can lead to the release of massive amounts of greenhouse gases into the atmosphere, which could hence lead to the accelerating of global warming far beyond people’s control.

Tackling the climate crisis with soil

In April 2019, a group of highly influential scientists and activists called for ‘defending, restoring and re-establishing forests, peatlands, mangroves, salt marshes, natural seabeds and other crucial ecosystems’ to let nature remove carbon dioxide from the atmosphere and store it. Restoring ecosystems would also support biodiversity and enhance a wide range of ecosystem services, including cleaning air and water, and providing people with enjoyable spaces for recreation.

According to a review of the existing information on the interrelations between soil and climate change (Climsoil report), around 75 billion tonnes of organic carbon is stored in EU soil. About half of these soil stocks rest in Sweden, Finland and the United Kingdom, as these countries have more forest soils, and in particular wet organic soils such as peat, than the others. To put this in some perspective, according to the EEA’s most recent estimates, the EU’s total CO2 emissions in 2017 were about 4.5 billion tonnes.

The amount of organic carbon in EU soils may be slowly increasing but estimates on the pace of this change are highly uncertain. To make matters more complicated, the organic carbon stock is also constantly changing, as plants capture carbon dioxide from the air before decomposing and releasing the gases back to the atmosphere. A report by Intergovernmental Panel on Climate Change (IPCC) confirms that greenhouse gas emissions from all sectors — including land and food — need to be reduced in order to achieve the target of keeping global warming to well below 2 degrees Celsius.

Despite the uncertainties, restoring ecosystems and improving soil quality could be a very cost-efficient measure in terms of climate action with a triple impact. First, growing plants remove carbon dioxide from the atmosphere. According to the FAO, restoring currently degraded soils could remove up to 63 billion tonnes of carbon, which would offset a small but important share of global greenhouse gas emissions. Second, healthy soils keep the carbon underground. Third, many natural and semi-natural areas act as powerful defences against the impacts of climate change.

The examples of benefits are many. For example, areas next to rivers (riparian zones) and green spaces in cities can act as cost-effective protection against floods and heat waves. Healthy land and soil can absorb and store excess water and alleviate floods. Parks and other natural areas in cities can also help with cooling down during heat waves, partly because of the water present in their soil. During dry seasons, healthy ecosystems can slowly release the water they have stored underground, mitigating the worst impacts of droughts.

Capturing the carbon in the air

There are also various methods for increasing land’s capacity to capture carbon dioxide from air. A recent European research project (Caprese study) found that the conversion of arable land to grassland is the most rapid way of increasing the amount of carbon in soil. For arable land, the use of cover crops — plants such as clover grown in between harvest and sowing the next crop mainly to increase soil fertility and avoid erosion — was the most effective way of increasing carbon stocks in soil.

In contrast, decisions to use land differently can also change areas, making them sources of emissions. Notable examples of this are draining peatlands, burning peat from bogs for heating, ploughing up grassland and cropland, which releases previously stored carbon. For forests, the dynamic is the same but with a different timescale. Like soil, forests are both carbon stocks and carbon sinks, meaning that they both store carbon and capture it from the air. In many cases, young, growing forests capture carbon more rapidly than old forests but harvesting old forests removes the carbon stock from the forest. Depending on how the wood is used, the carbon may be released sooner, such as when the wood is burned for heating, or much later, when the wood is used for building houses, for example.

Healthier soils and land ecosystems could capture and store more carbon dioxide from the atmosphere than they currently do. Green spaces and natural areas could also help people and nature to adapt to the inevitable changes in our climate. Soil alone cannot fix climate change but it needs to be factored in and could be a powerful partner in our efforts.

EU action and EEA work on soil and climate change

The EU thematic strategy for soil protection and its implementation report emphasise the importance of healthy soil in both climate change mitigation and adaptation. The Paris Agreement highlights the critical role of the land use sector in climate action.

Following suit, a new EU regulation on land use, land use change and forestry requires that Member States, at the minimum, fully offset the sector’s greenhouse gas emissions from 2021 to 2030.

The implementation of the new regulation requires reporting and monitoring, which the EEA will support. The EEA also continues to develop knowledge about the environmental issues associated with land use and forestry and related land management practices, including by using Earth observation data from the Copernicus Land Monitoring Service. Many of the EEA’s assessments, indicators and data on soil, land, ecosystems, agriculture, forestry, green infrastructure and other topics also have strong links to climate change.

A lot remains unknown, but the better we understand the dynamics between soil, land and the climate, the better are our chances of designing and implementing sustainable solutions.

Verde Environmental Consultants undertake characterisation of soils as required by landfill regulations and undertake the necessary sampling to assess whether a waste is classified as hazardous or non-hazardous. Our specialists are trained in the use of the appropriate classification tools and have an in-depth knowledge of the relevant legislation and guidance, which allows them to guide clients in establishing cost effective and sustainable soil management solutions.