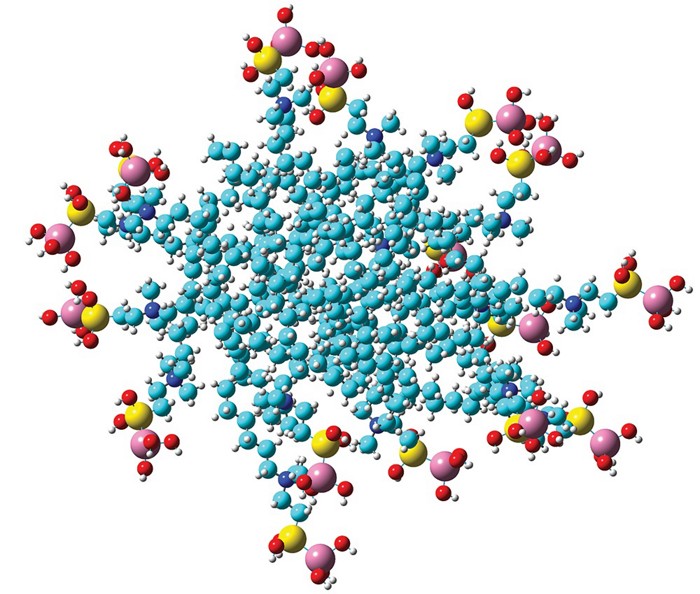 Scientists have created a nanoparticle-based material that does double duty when cleaning up wastewater—filtering out small particulate matter and dissolved chemicals in a single step. The strategy could streamline wastewater treatment processes, which currently use multiple steps to eliminate unwanted colloids, ions, and organic chemicals from water.

To remove unwanted particulate matter from wastewater, treatment facilities use a coagulant, such as FeCl3, which forms a fine precipitate that settles to the bottom of the water, allowing the facilities to filter out the small particles. Researchers led by Peking University’s Huazhang Zhao and Yale University’s Menachem Elimelech thought they could create coagulants that also remove ions and organic chemicals at the same time. But they were having trouble making material that sopped up dissolved chemicals and could be stored without precipitating or forming a gel.

“The behavior of the marine predator Actinia popped into our minds,” Zhao says. These sea anemones curl up into a ball with their tentacles wrapped inside their bodies when resting. When the creatures want to catch a meal, they turn their bodies inside out, exposing the prey-ensnaring tentacles. The researchers realized they could mimic this behavior by creating nanoparticles with a core of greasy organic groups and a shell of polar aluminum silicate complexes. At a pH lower than 4, the particles are closed, but at higher pH, such as in wastewater, water surrounds the aluminum silicate complexes, pulling the particles open and exposing their tentacle-like organic interiors (Nat. Nanotechnol. 2018, DOI: 10.1038/s41565-018-0307-8).

In tests on wastewater, the particles formed a precipitate that filtered out more than 90% of colloidal particles. It also removed 90% of nitrates and 90% of dissolved organic pollutants, such as pharmaceuticals, thanks to electrostatic and hydrophobic interactions with the dissolved species.

“The capability of removing large organic compounds and small, ionic contaminants is especially attractive,” says Qilin Li, an expert in water treatment technology at Rice University. “Our century-old water and wastewater treatment paradigm needs novel approaches like this,” she says.