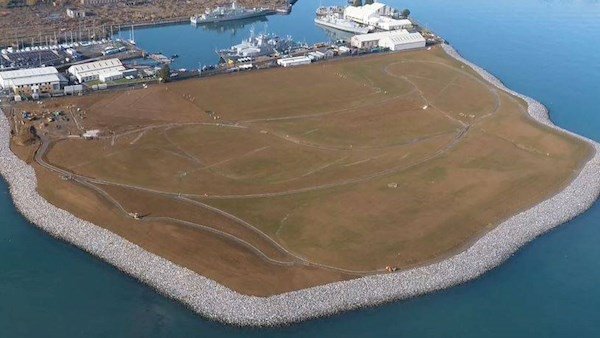 A report from 2017 has revealed that Cork County Council was warned that pollution on Haulbowline had “the potential to cause risks to any users of a potential future park” on the site.

The document’s findings have led an environmental group to question why neither the council nor the Government revealed the results of the analysis of what is one of the country’s worst polluted former industrial sites.

The former Ispat/Irish Steel site has seen remedial works carried out on the nine-hectare waste site on Haulbowline known as the East Tip, which was a dumping ground between 1996 and 2001. Cork County Council plans to open a park on this section of the island this year.

However, an April 2017 report prepared for Cork County Council by consultants Young White Green and released to Friends of the Irish Environment (FIE) under Access to Information on the Environment says that analyses of ground samples “identified elevated concentrations of arsenic, lead and PCBs in shallow soil with the potential to cause risks to any users of a potential future park and also commercial site users”.

“Remediation is considered necessary to protect the health of the end users of the site for arsenic, lead, PCBs and asbestos through direct contact, ingestion and dust inhalation pathways and ground gas inhalation with respect to human health,” the report recommends.

While it recommends the provision of a “capping layer” to any soft landscaping areas as a possible remedial approach, most of the island has yet to see such works.

Tony Lowes, of FIE, who first reported the contamination to the European Commission in 2009, said the ongoing source of serious pollution in the centre of Cork Harbour, when funding has been available, “is not consistent with a responsible protection of our environment”.  “If the council insists on opening the public park, it is the law that signage and other notices that are easily accessible and understandable warning the public of the ongoing dangers must be erected on the island and in the adjacent waters,” said Mr Lowes.

In May 2015 the Government said that €61m would be given to the Department of Agriculture, Food and the Marine to provide for a “whole of island” approach to the remediation of Haulbowline.

Earlier this year FIE lodged a complaint with the European Commission, alleging that work has yet to be carried out on decontaminating the remaining 11 hectares on the island outside of the East Tip.

Our services to clients with contaminated land problems include:

For more on our Contaminated Land Remediation services, click here.