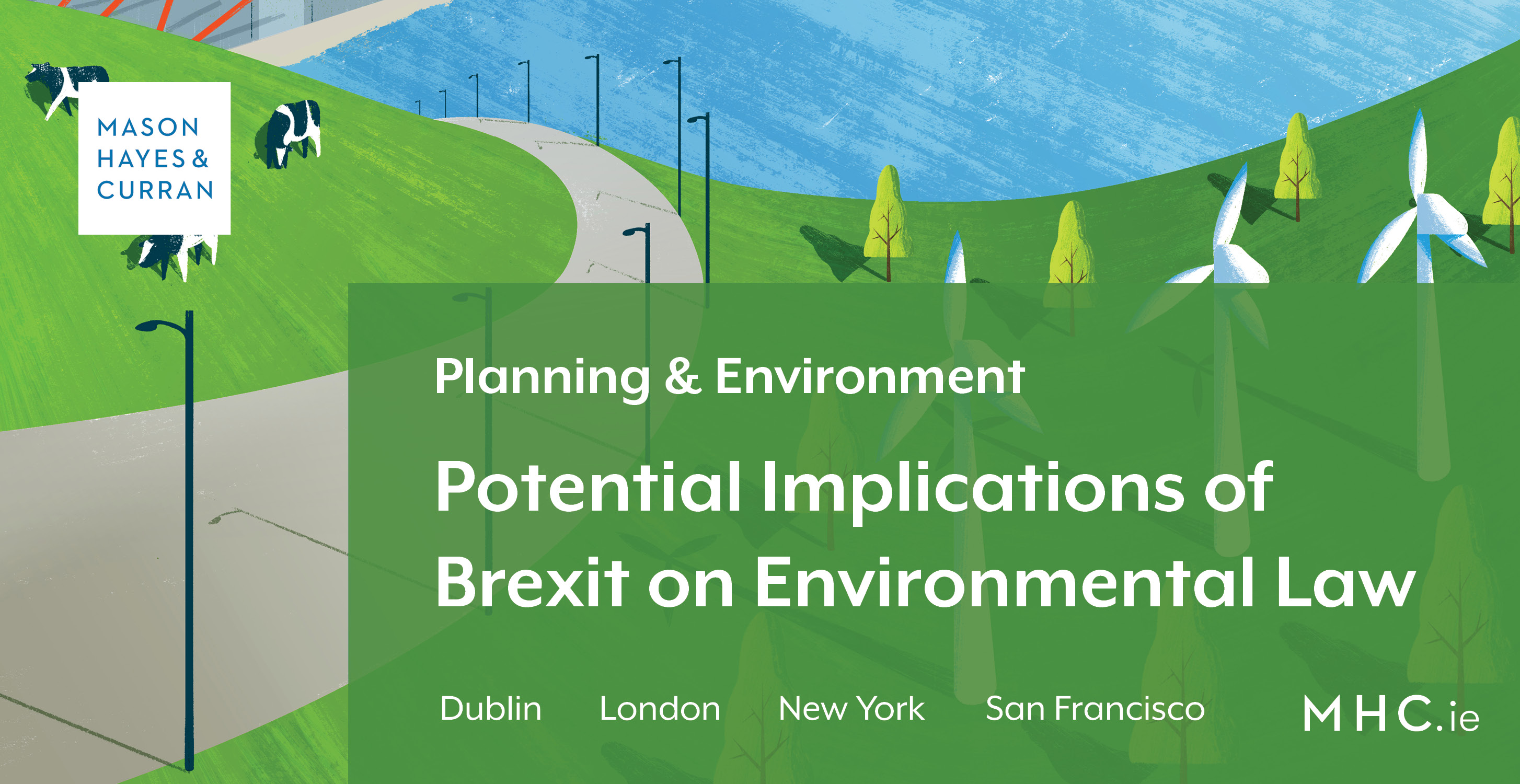 Brexit has the potential to impinge on the efficacy of environmental law in protecting the Irish environment. As has been stated by many commentators, the same homogenous and inseparable eco-system will continue no matter what political borders exist on the island post Brexit. Therefore any disturbance to the effectiveness of environmental or planning law by Brexit could have a significant impact on the environment in Northern Ireland and Ireland.

First and foremost, Brexit threatens the operability of the Good Friday Agreement (the “Agreement”). This is an issue that has been examined throughout Brexit discussions, and has an environmental aspect in the form of Strand 2 of the Good Friday Agreement. This pillar of the Agreement guarantees North-South co-operation on a number of key areas, with environmental protection being one of these, enabled thanks to the EU regulatory framework. The overarching North/South Ministerial Council and the implementation bodies such as Waterways Ireland and the Loughs Agency have established a coherent all-island approach to protection and pollution. Any risk to the operability of the Agreement from Brexit would put this cross border co-operation into jeopardy on environmental matters.

Once the UK exits the European Union, it is difficult to envisage how future regulatory alignment on environmental issues can be maintained. Having a universal foundation on environmental matters is central to ensuring the eco-system on both sides of the border is balanced and harmonious. Should the UK take a different path to the EU with its future environmental laws, the island of Ireland would find itself in  a scenario where there are two different legal frameworks covering the one relatively small biosphere, parts of which may lie in counties which are on the border meaning that certain environmentally protected and designated areas could in part be in the North and South of Ireland, with different laws, environmental standards or planning considerations governing different parts of the site. This could serve to undermine efforts in Ireland to implement EU principles if a more relaxed framework of environmental protections is created in the North.

There is a risk also that funding for cross-border initiatives could be cut by Brexit. This funding includes that provided by the EU for Projects of Common Interest under the Connecting Europe Facility for projects in certain types of industries such as energy and transport. While EU funds will still be available for Ireland, values may be diminished if the second party to an initiative is no longer an EU member state. Environmentally beneficial cross border projects in the North and South of Ireland such as The Shared Waters Enhancement and Loughs Legacy and The Marine Protected Areas Management and Monitoring project have received EU funding from the Special European Union Programmes Body, which has been vital to their success. Bringing schemes such as these to fruition may prove difficult if Northern Ireland will no longer be entitled to receive EU funding.

The potential removal of Northern Ireland’s access to the Court of Justice of the European Union (CJEU) may pose issues for border counties also. This may be case in particular instances where, as previously mentioned, special designated sites of environmental importance span across a county in the North and a county in the South of Ireland, or indeed PCI projects being developed between Ireland to the UK. While the UK may express a commitment to maintain principles of EU environmental law post Brexit, until a concrete plan is expressed there is no certainty over how this will be handled. In the absence of the CJEU’s jurisdiction to enforce environmental or planning law in Northern Ireland or indeed in the UK, Ireland may face difficulties in harmonising issues and disputes over environmental standards in Northern Ireland.

A “hard” Brexit with no deal will certainly test Strand 2 of the Good Friday Agreement and it remains to be seen whether a workable and mutually agreeable solution can be found to these issues. If such a “no-deal” scenario materialises, it is plausible that there will be significant disruption to the fundamental operability of the risk areas of regulatory alignment, cross-border co-operation and funding of all-island initiatives. If the UK opts to join the European Economic Area (EEA), the impact may be quite limited since environment is one of the areas under the EEA Agreement where members must follow the EU’s lead.

Logically, the most effective way of ensuring continuity of environmental standards would be if the island of Ireland and its surrounding seas comprise a single biogeographic unit and which would address shared environmental issues such as biodiversity loss and the conservation of freshwater and marine resources on an all-island basis with emphasis on close cross-border cooperation in this regard. Ensuring that appropriate mechanisms are in place to guarantee a close regulatory alignment on environmental matters will also be important, if indeed this is possible to attain.

Should you have any queries in relation to the environmental challenges posed by Brexit, please contact a member of our Planning & Environment team.