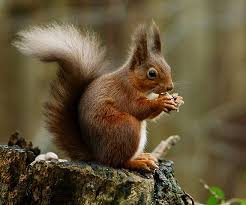 The Minister for Culture, Heritage and the Gaeltacht, Josepha Madigan TD, has welcomed the new Red List for Mammals for Ireland, which highlights the value of monitoring programmes managed by the Department’s National Park and Wildlife Service (NPWS).

The Red List – which assesses the conservation status of Ireland’s terrestrial mammals – shows population improvements for the red squirrel, otter and Leisler’s bat since the last Red List assessment was carried out 10 years ago. At that stage, these three species were considered to be “Near Threatened” due to concerns about population declines.

More recent information, and in particular the results of large scale monitoring programmes and national surveys undertaken and funded by the NPWS, demonstrate population recovery.

All 25 terrestrial species native to Ireland or naturalised in Ireland before 1500 were included in the Red List assessment. In addition, the grey seal and harbour seal, which spend much of their time on land, were also included.

This new Red List provides a full and objective assessment of the extinction risk of these species using the International Union for Conservation of Nature (IUCN) conservation status categories. These standardized categories, and the assessment framework that underpins them, are used across the World allowing for direct comparisons with other regional assessment and the global mammal assessments.  They are designed to identify those species most in need of conservation interventions due to their extinction risk.

The new Red List for Ireland’s mammals is encouraging. The car transect bat monitoring programme indicates that Leisler’s bat population has increased by almost 30% since monitoring began in 2004. Ongoing otter surveys have confirmed that this species has recovered from any population declines and is widespread across Ireland.

Most recently, work underway in NUI Galway with the support of NPWS and the National Biodiversity Data Centre is showing a remarkable recovery in red squirrel range. These three species have been down-listed from “Near Threatened” to “Least Concern”.

The black rat is now the only terrestrial mammal species to be considered threatened in Ireland. It was categorized as “Vulnerable” due to its very restricted distribution – it is only found on Lambay Island off the coast of Dublin. This species is not a conservation priority, however, and in fact is considered a threat to the important colonies of cliff nesting birds on Lambay.  While the conclusions of the Red List assessment process are very encouraging, the authors of the publication highlight concerns relating to habitat quality and point to the conclusions of the recent Article 17 report which indicated that many of the natural habitats in Ireland are under threat. The authors also identify areas of mammal ecology in Ireland requiring further research.

Source – Department of Culture, Heritage and the Gaeltacht