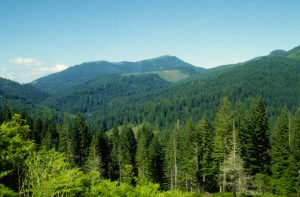 An attempt to transform the Irish landscape with nature’s own carbon captors will see 22 million trees planted every year for the next 20 years.  The ambitious plan is the equivalent of planting more than 6,000 Croke Park pitches every year until 2040.  If successful, the area of land under trees could increase by 20pc to almost one-million hectares, although that would still leave Ireland at the bottom in Europe for forest cover, ahead only of barren Malta.

Most of the planting will be done by the State, farmers and other large landowners by spurring renewed interest in existing grant schemes, but anyone with a quarter acre can apply and there are schemes to assist community groups.

One-third of the trees are to be broadleaves, which would help restore some of the native woodland lost to the near monopoly of conifers.  Increasing tree cover is a pledge in the Government’s Climate Action Plan, but this is the first time Climate Action Minister Richard Bruton has committed to an actual number of saplings in the ground.

Trees are a vital tool in climate action as they absorb greenhouse gas and ease some of the effects of freak weather. Roots knit the soil together to stop it being washed away by intense rainfall and leaves provide shade for livestock and wildlife in searing heat.

However, environmentalists question the plan. Pádraic Fogarty of the Irish Wildlife Trust said the €94m a year spent on forestry grants might be better spent paying landowners not to plant anything at all.  “People are not good at planting trees and trees do not like being planted. They prefer to plant themselves,” he said.  His preference is for rewilding – leaving land alone to let nature take its course. “We have a mental block about letting nature do its thing. We see a space recovered by nature and we think it’s scrub and wasteland and want to get it back ‘under control’ whereas if we just left it alone, the forest would come back all by itself.”

Rewilding has proved successful in parts of Scotland, which, incidentally, planted 22 million trees last year and is planning further increases.  “They’ve shown you can get amazing results within 10-15 years. You don’t get ancient oaks, but you get birch, willow and mountain ash, which are all fast-growing and then the others come with time.”

Peadar Collins, a self-confessed ‘tree nut’ who farms in Cork, is a director of Crann, the Trees for Ireland charity, and runs a tree nursery, but he also has reservations.  “I worry when I hear about big numbers and grand gestures. We shouldn’t focus so much on increasing numbers as increasing awareness and appreciation of the value of trees and then the numbers will grow organically,” he said.  He said farmers were wary of forestry as it tied their land up for good, but he said they should be encouraged to plant around their fields.  “Farms have kilometres and kilometres of boundary and this should all be planted,” he said.

He also said we had to learn to save existing trees. “Preserve as much as you can, replace what you remove and plant where you have space and then we’ll make progress,” he said.