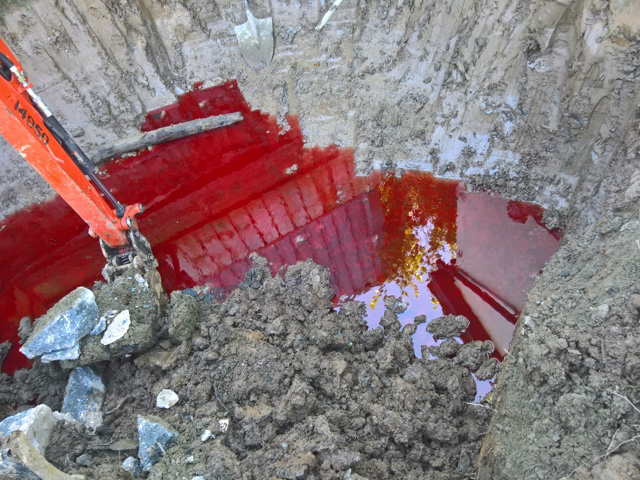 Whilst undertaking an oil spill incident at a residential property in Co. Wexford, we discovered a large amount of free phase kerosene had leaked into a French drain.

By discovering the oil in the french drain, Verde were able to carry out remediation works to prevent the oil migrating to the walls at the back of the property and from also leaking further into neighbouring properties.

So what is a French Drain?

A French drain or weeping tile (also trench drain, filter drain, blind drain, rubble drain, rock drain,drain tile, perimeter drain, land drain, French ditch, sub-surface drain, sub-soil drain or agricultural drain) is a trench filled with gravel or rock or containing a perforated pipe that redirects surface water and groundwater away from an area. A French drain can have perforated hollow pipes along the bottom to quickly vent water that seeps down through the upper gravel or rock.

French drains are primarily used to prevent ground and surface water from penetrating or damaging building foundations and as an alternative to open ditches or storm sewers for streets and highways. Alternatively, French drains may be used to distribute water, such as a septic drain field at the outlet of a typical septic tank sewage treatment system. French drains are also used behind retaining walls to relieve ground water pressure.