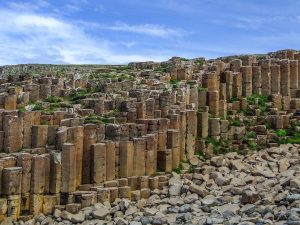 Northern Ireland is at risk of becoming “the dirty corner of Europe”, campaigners say, if more ambitious targets are not set for the country as it seeks to approve its first dedicated climate legislation.  Officials at the devolved Stormont institutions say that the environment strategy for Northern Ireland lags considerably behind the commitments made by Great Britain and Ireland, adding to concerns Northern Ireland may be becoming a serious outlier in climate and environmental governance.  Stormont’s agriculture and environment committee heard this month that the targets outlined in its draft climate strategy are “significantly less ambitious” than those set by England, Scotland and Wales.

The draft strategy’s target of 70% of water bodies reaching “good” status by 2027 falls “significantly” short of Scotland’s target of 81%, the committee heard. It is understood the strategy at present does not include an aim to recycle 70% of all waste by 2030, as recommended by the UK’s Climate Change Committee (CCC), nor does it set targets for food wastes and overall waste as Scotland and Wales have done.

Pledges to increase new woodland plantation by about 1,400 hectares annually to 8.8% coverage by 2030 – with Northern Ireland having the lowest tree cover in Europe – were also said to be significantly behind corresponding pledges in Scotland, Wales and Ireland.

Currently out for consultation, Tuesday is the deadline for the public to respond to the draft strategy.  “The environment strategy is weak, flawed and fails to address the legacy of a country with declining water quality and no clean air strategy,” said James Orr, the director of Friends of the Earth Northern Ireland.  “With only two months to go in this executive to pass progressive climate legislation, all eyes are watching to see if Northern Ireland can grasp the last chance in this mandate to build a society that works with nature or be ridiculed as the dirty corner of Europe.”

Northern Ireland has for a number of years been the only devolved administration without its own specific climate change legislation and targets for emissions reduction. The 2008 UK Climate Change Act only requires emissions cuts as a cross-jurisdiction aggregate.

Two competing climate bills are making their way through the Northern Irish assembly – the first a private member’s bill introduced in October 2020 that would set a legally binding 2045 net zero target, and another, tabled in July 2021 by the agriculture minister, Edwin Poots, aims for carbon emissions to be reduced by 82% by 2050. Upcoming elections for the devolved parliament are to be held no later than 5 May.

Poots, echoing farming groups’ claims that the 2045 target could wipe out half of the country’s livestock farmers if enforced, has said the first bill would “decimate” Northern Ireland’s agrifood industry – which recorded a turnover of more than £5bn in 2019 and employs about 25,000 people.

The Green party NI leader, Clare Bailey, who tabled the first climate bill, said: “If Northern Ireland remains the only part of the UK with no climate legislation and no net zero target, it risks undermining the UK’s climate action on a national level.  “Northern Ireland has the highest per-capita emissions of anywhere in the UK, so it’s crucial that emissions are rapidly reduced here to ensure the UK meets its national targets.”

The climate act is one of a number of environmental pledges at the heart of the “New Decade, New Approach” agreement that restored the devolved governing institutions in January 2020, after a record shutdown period of more than three years. An independent environmental protection agency regulator and a “green new deal” package promised for Northern Ireland are both yet to be delivered.

Civil society organisations say the requisite science and technology is already in place to enable a rapid transition towards net zero and that the choice between the two climate bills is fundamentally a political one.  “Northern Ireland’s inability to fulfil climate commitments is due to political failings, rather than a lack of scientific evidence,” said Dr Amanda Slevin, the chair of the Climate Coalition NI group.  She accused Poots of having used CCC findings “selectively”, saying that his bill “gives the Department [of Agriculture, the Environment and Rural Affairs] the authority to change the [climate] targets both in terms of the level of emissions reductions and the date by which they are to be achieved. In effect, the bill’s targets are not fixed.”

Although the CCC chair, Lord Deben, has said it would be “morally wrong” to hold Northern Ireland to the 2045 net zero goal, the organisation stresses that its 82-84% reduction target is a minimum for Northern Ireland and that it should be reviewed over time.  Poots said: “My executive climate change bill, which is currently undergoing legislative passage, is evidence-based and science-led, and its at least 82% emissions reduction by 2050 target for Northern Ireland has been advised by the independent and world-renowned expert statutory advisory body – the UK Climate Change Committee.  “This at least 82% target is a highly ambitious but an equitable contribution for Northern Ireland to fully contribute to UK net zero through a balanced pathway that will both protect the environment and boost the Northern Ireland economy. It also is scientifically compatible with the emissions pathway required to keep to the Paris agreement’s 1.5C [above pre-industrial levels] global warming limit.”