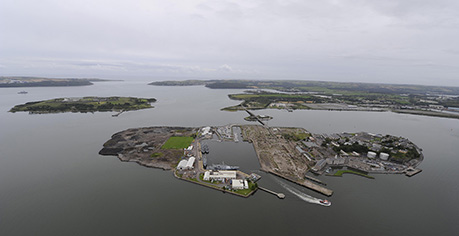 Clean-up works on of one of Ireland’s worst cases of industrial pollution, the former Ispat/Irish Steel site on Haulbowline Island in Cork Harbour, have been delayed indefinitely.  Three heavily contaminated sites on the island were to have been remediated by last July but, with only one – the former east tip – remediated so far, plant and equipment were taken off the island in the latter half of last year.

The delay with the remaining two sites was confirmed by the Department of Defence, which is to be the new owner of the island. “There is no definitive timeline for the completion of the remediation works,” it said.  An all-island approach to the clean-up promised by Tánaiste Simon Coveneyin January 2016 appears to have become mired in bureaucracy.

Cork County Council, which carried out the remediation of the east tip on an agency basis for the Department of Agriculture, the island’s current owner, said plans to clean up another tip on the south of the island and the former steelworks itself were a matter for the department.  But the department said the Government had decided the future owner of the island would be the Department of Defence and “any” further remediation, including the the south tip and former steelworks, “would need to be cognisant of their likely long-term use”. It said it was consulting the Department of Defence on the issue.

However, the Department of Defence said ownership of Haulbowline Island rests with the Department of Agriculture, which it said was “responsible for the remediation work. The department confirmed there was now no definitive timeline for the completion of the remaining work.

A major recreational park for the people of Cork is due to open on the island in May this year.

No applications for waste licences or planning permission to clean up the south tip or the former steelworks have yet been lodged. Just €23 million of the ring-fenced fund of €61 million budget allocated by the Government for the scheme has been spent.  Haulbowline Island has been a cause of concern since an investigation carried out in 1995 showed high concentrations of copper, chromium, cadmium, lead and zinc, up to 17 times acceptable levels. The investigation also found “elevated levels of metals” in harbour sediments adjacent to the landfill.

Friends of the Irish Environment, which made an initial complaint to the EU in 2009 in relation to the steel contamination, said it was a “bureaucratic nightmare”. The organisation has written again to the EU Commission asking if anything can be done to make Ireland adhere to its commitment.

Verde is a leading contaminated site management specialist, providing a breadth of consultancy and contracting services that help our clients deal with contaminated site issues, large or small. Our suite of services include everything from contaminated land assessment and monitoring, to remediation design and implementation.

Verde also offer a wide range of environmental risk assessment and risk management skills in soil, water and human health to derive defensible, realistic target values for any remediation that may be required.