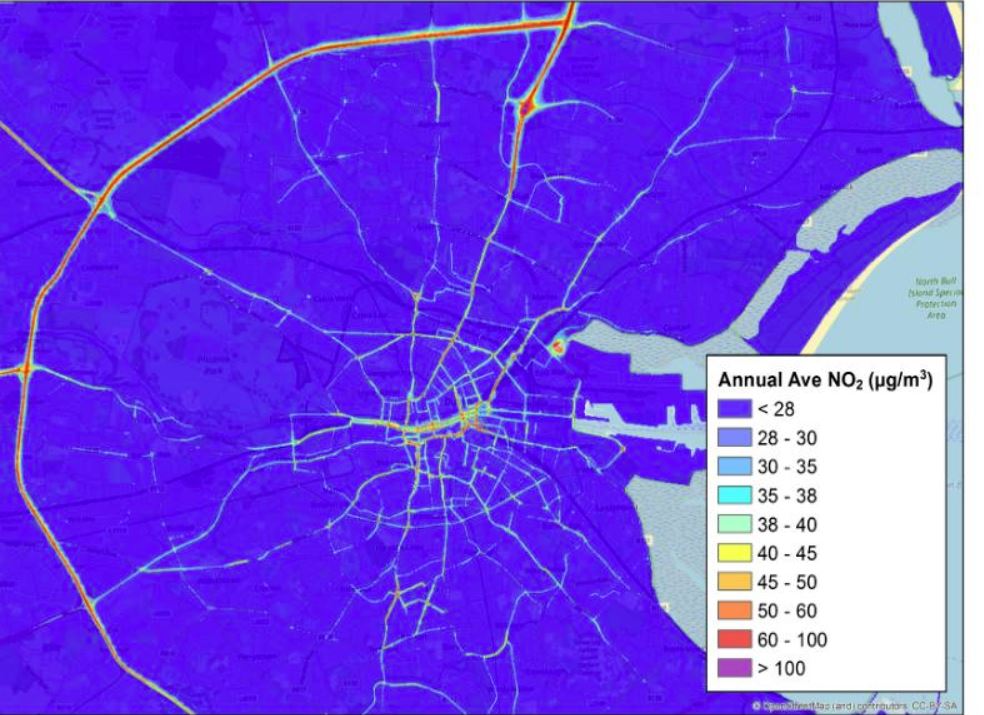 Indicative monitoring and modelling in Dublin is suggesting that areas of the city have high levels of air pollution and may be over the statutory EU limit for the pollutant Nitrogen Dioxide (NO2). These were among the findings in the Environmental Protection Agency’s report, Urban Environmental Indicators – Nitrogen dioxide levels in Dublin, released today.

Previous reports by the EPA have flagged NO2 as being potentially problematic and stated that we were approaching the EU limit value in urban areas. This report presents new evidence from dispersion modelling and monitoring using NO2 measurement tubes which indicate that NO2 may exceed the annual EU limit value in the following areas:

As part of the National Ambient Air Quality Monitoring Programme (2017 – 2022), new equipment to assess air quality is being installed across the country.  Geared to provide increased access to air quality information, the Programme has allowed the EPA to identify suitable sites for additional air monitoring stations in Dublin. As an outcome of initial result from the NO2 tube studies, a new air monitoring station was set up at St John’s Road West, near Heuston Station and a further new monitoring station will be opening on Pearse St this summer.  These areas have high NO2 levels that are likely to exceed the European annual limit value for NO2.

“This report outlines the findings of two recent studies which suggest that levels of Nitrogen Dioxide in certain parts of Dublin are exceeding the EU limit value. Given the known health impacts on people’s respiratory systems, this is a cause of concern. Traffic is the dominant source of Nitrogen Dioxide in our urban areas and the public must be supported in taking clean transport choices if we want to reduce nitrogen dioxide concentrations in the air we breathe.

“The climate action measures recently put forward by Government for the transport sector in Dublin can also act to reduce harmful health impacting pollutants such as Nitrogen Dioxide. This report is a further call for co-ordinated action to tackle transport emissions in Dublin.”

“The report clearly shows the impact on the levels of Nitrogen Dioxide from traffic on busy roads on the areas close by and presents an early warning of potential exceedances in Dublin. The findings of this report are supported by monitoring data at the new air quality monitoring station at St Johns Road West in Dublin. Installed in late 2018 as part of the monitoring network expansion under the new National Ambient Air Quality Monitoring Programme, this station is recording high levels of Nitrogen Dioxide. We will continue to monitor the results from this station and have started discussions with the relevant authorities”

What is nitrogen dioxide (and nitrogen oxides)?

Emissions from traffic are the main source of nitrogen oxides (including nitrogen dioxide) in Ireland along with electricity generating stations and industry. Levels in Ireland have been increasing due to growth in traffic numbers.

It impacts visually as it has a brown colour and gives rise to a brown haze. Oxides of nitrogen contribute to the formation of acid rain and of ozone.

What are the health impacts of nitrogen dioxide?

Nitrogen dioxide can affect the throat and lung. The main effects are emphysema and cellular damage.

Exposures to high levels over short periods can give rise to acute health effects: aggravating respiratory diseases, particularly asthma, leading to respiratory symptoms.  Longer exposures to elevated concentrations of NO2 may contribute to the development of asthma and potentially increase susceptibility to respiratory infections.

People with asthma, as well as children and the elderly are generally at greater risk for the health effects of NO2.

What is the EU limit for nitrogen dioxide?

EU directives have set two limits for nitrogen dioxide for the protection of human health:

The EPA continually monitors air quality across Ireland and provides the air quality index for health and real-time results on the website at www.airquality.ie. Results are updated hourly on the website. Log on at any time to check whether the current air quality in your locality is good, fair or poor.

The programme has made significant progress across its three key pillars of modelling/ forecasting, citizen science/ citizen engagement and expansion of the national air quality monitoring network with the number of ambient air quality monitoring stations providing accessible real-time air quality information to the public more than doubling compared to 2017.

Nitrogen dioxide (NO2) is an air pollutant associated with urban areas. It is strongly linked with traffic emissions. High levels affect our lung health. In previous EPA annual air quality reports, we have noted NO2 levels in urban areas approaching the EU limit value. This publication provides new evidence on levels in Dublin. It looks at the main findings from assessments of NO2 levels using techniques that allow us to look at a wider area, beyond the national monitoring stations. It also suggests some next steps. Our findings represent an early warning of potential exceedances of EU limit values in Dublin – long-term exposure to these levels of NO2 is a cause of concern for people’s health and action needs to be taken now to address these findings.

The results of this assessment are an early warning – they signal the need for strong, co-ordinated action by all the relevant authorities to improve air quality in Dublin.

In order to improve the availability of real-time air quality data to the public, EPA is setting up new permanent monitoring stations. In Dublin this includes locations identified by this work as having the highest levels of NO2. One near Heuston Station is already running and a second one is being installed on Pearse St.

If further monitoring confirms that the EU limit values of NO2 have been exceeded, local authorities in Dublin and its suburbs will be legally required to prepare air quality action plans to address the causes and provide solutions in the affected areas. The measures adopted by other European cities have included promoting the greater use of cycling, walking and public transport, low emission zones and moving to cleaner modes of public transport. Implementation of the Government’s recently published Climate Action Plan will also have benefits for air quality – EPA is recommending that the proposed actions on road transport be progressed as soon as possible to improve air quality in the city.