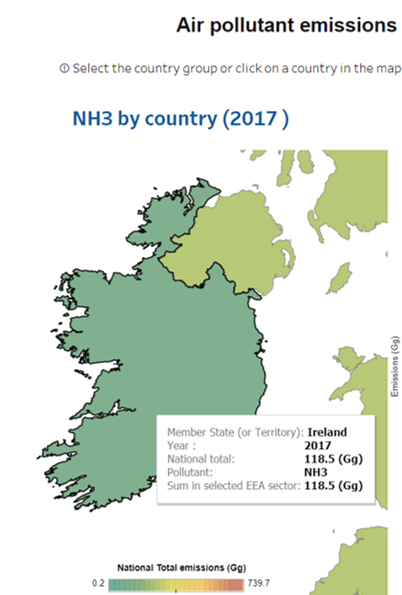 European Union (EU) Member States have made only mixed progress in reducing emissions of the most harmful air pollutants, according to updated data published by the European Environment Agency (EEA).

The data is from the annual EU emission inventory report sent to the UNECE Convention on Long-range Transboundary Air Pollution (LRTAP).

The EEA report  confirms, as highlighted in the recent EEA briefing on the EU’s National Emissions Ceilings Directive earlier this month, that after many years of past declines, for more than half of the 26 pollutants monitored emissions increased slightly in 2017 compared to the previous year. Releases came from key sources such as agriculture, transport, industry and private households.

The report notes that between 2016 and 2017, emissions of nitrogen oxides (NOx) and sulphur oxides (SOx) dropped by 1.8% and 1.3% respectively. However, emissions of non-methane volatile organic compounds (NMVOCs) increased by 1.3%, carbon monoxide (CO) emissions by 0.2% and ammonia (NH3) by 0.4%. Emissions of particulate matter, and several heavy metals and persistent organic pollutants also all increased slightly in 2017 compared to the previous year. In recent years, the rate of emission reductions has stagnated for many pollutants. And as noted, for a number, it has actually slightly increased.  For example, ammonia emissions, which can lead to particulate matter formation in the atmosphere, have fallen less than emissions of the other main pollutants since 1990 and increased in each of the past four years.

The report also highlights the growing importance of the residential stationary combustion sector, which includes the burning of fuels in domestic stoves. This source makes a significant contribution to the total emissions of many pollutants and contributed 51% of fine particulate matter (PM2.5) emitted directly into the air in 2017. Further, 42% of total carbon monoxide, 42% of polycyclic aromatic hydrocarbons, 24% of the dioxin and furan compounds and 16% of the heavy metal cadmium were released by this single source.

The LRTAP report tracks the emissions of key air pollutants over past years. It is submitted by the EU to the UNECE under the requirements of the Gothenburg Protocol to the LRTAP Convention, which aims to limit, and as far as possible, gradually reduce and prevent air pollution. The protocol also sets emission limits for a range of air pollutants that have to be met from 2010 onwards, which for Member States are either equivalent to or less ambitious than those specified under the 2010 EU NEC Directive. Air pollution is the single largest environmental risk to human health in Europe, causing respiratory problems and shortening lifespans. Poor air quality caused by air pollution can also harm vegetation and sensitive ecosystems. Moreover, several air pollutants also contribute to climate change.