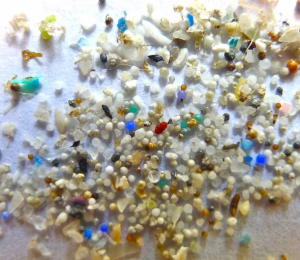 Mircoplastics have been documented in over 90 per cent of Ireland’s protected marine environments in the first major study aimed at understanding the true extent of pollution around the entire coast.   Of 87 Special Areas of Conservation (SACs) and Special Protection Areas (SPAs), 79 were found to have the man-made materials buried in sediments, the vast majority coming from clothing and fishing equipment.  Researchers at NUI Galway’s Earth and Ocean Sciences department believe their near two-year study should now be used as a benchmark for routine coastal sampling required under European Union marine directives.

Published in the international journal Marine Pollution Bulletin, the report notes that microplastics – materials typically less than 5mm in length – ending up in marine sediment is now a geographically widespread problem in the State. Their entry into the sea environment is the result of mismanagement of various sources including public littering, sewage treatment effluent and overflows, recreational boats and cruise ships, as well as commercial fishing vessels, the research found.  “We know that it’s everywhere around our coastline,” said lead author Dr Liam Morrison “If we look around us, every single thing we use in our daily lives, including the clothes we wear which are made from micro-plastics, it’s all ending up around our coastline.”  In a period of bleak environmental news, the detailed insight into Ireland’s coastal waters will come as another blow, and Dr Morrison believes the problem is set to be exacerbated by the mass accumulation of personal protective equipment (PPE) during the Covid-19 pandemic.

The study, co-authored by NUI Galway researchers Ana Mendes and Dr Nessa Golden, examines micro-plastics in both intertidal (exposed during tides) and subtidal (submerged) areas, and found more of the material was captured in finer-grained sediment such as mudflats. As a more stable environment, the subtidal zone is considered a “sink for microplastics”.

The most common type found around Ireland was polypropylene (34 per cent) followed by polyethylene terephthalate (26 per cent) and polyethylene (26 per cent). The multitude of clear fibres suggested they came from grey-water sources such as from sinks, showers and baths but primarily from washing machines.  “Ireland is the highest producer of plastic waste per person in the EU and the fourth worst in recycling rate,” Dr Morrison said, citing latest Eurostat data.

The study is important in helping understand the possibility of micro-plastics being consumed by sea life, which can, in turn, be consumed by humans.  It is generally believed the type, distribution, and abundance of micro-plastics is a consequence of its increased production, coastal population growth, and proximity to urban wastewater outflows, the study says.

Ireland’s northwest coast had the highest concentration of material (up to 544 fibres and 77 fragments per kilogram of sediment), while the southwest and southeast had far less (fewer than 200 fibres and 22 fragments).

International comparisons are currently difficult to rely upon as microplastic marine studies are a relatively new field of research, often applying non-standard methods.

However, the Irish results came as little surprise to the researchers. “We know it’s a problem everywhere. We know when plastics get into the water they are going to fragment and break down,” Dr Morrison said.  “For the past 100 years plastic has been going into the sea. Some scientists estimate that by 2050 there will be more plastic in the sea than fish. We have to start changing human behaviour.”