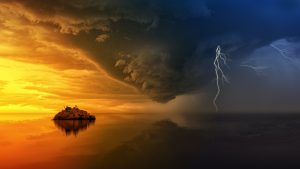 Many Irish cities to face more extreme weather conditions by 2100

European cities, including Cork, Waterford, and Derry, will face extreme weather conditions such as droughts, heat waves and floods by 2100 due to climate change, a new study has found.

The research from Newcastle University points in particular to an increased risk of urban flooding, especially in the UK and Ireland.

Cities such as Cork, Waterford, and Derry are among the most at-risk areas, the study finds. Even in a low-risk scenario, 85 per cent of UK cities are expected to experience more intense river flooding.

The analysis used projections of all available climate models. The models produced results for three possible scenarios which were divided according to their impacts. In all scenarios, even the low impact one, heat waves and temperatures will rise in all European cities.

The number of heat waves and the intensity of droughts will be higher in southern Europe, especially in countries like Italy, Spain, Portugal, and Greece.

Cities like Prague and Vienna could experience the highest increases in total temperatures during heat waves.

The changes in droughts and floods are more irregular, and the affected cities will depend on the type of scenario. In all projections, droughts will become more intense in southern Europe.

Impact in Ireland and UK

The study found that flooding will become worse in north-western Europe, particularly in the British Isles.

It predicts that 85 per cent of UK cities with a river will be at risk of increased river flooding. Cork, Derry, and Waterford would also suffer some of the worst damages in the high impact scenario.

Dr Conor Murphy, a senior lecturer in Geography at Maynooth University told The Green Newsthat the results of the study show that we are “vulnerable to extremes” here in Ireland.

Dr Murphy, who specialises in the impact of climate change on rivers and waterways, said that the report also highlights how concerted efforts at mitigation can reduce the risks of extremes to cities in Ireland and Europe.

“This work clearly shows that for high emissions or business as usual we can expect a combination of extremes for Ireland’s major cities,” he added.

“The key message is that we need to reduce greenhouse gases and adapt to expected changes, but not just for the extreme events we are used to – climate change will bring new experiences.”

Adapting to Climate Change
For co-author of the research, Prof Richard Dawson, the research has deep implications in relation to the ways Europe will adapt to climate change.

“The research highlights the urgent need to design and adapt our cities to cope with these future conditions. We are already seeing at first hand the implications of extreme weather events in our capital cities,” he said.

“In Paris, the Seine rose more than four metres above its normal water level. And as Cape Town prepares for its taps to run dry, this analysis highlights that such climate events are feasible in European cities too.”

According to Prof Dawson, one of the main points of this conference will be to prepare and organize actions from policymakers, researchers and the industry to prepare cities and their populations for climate change.