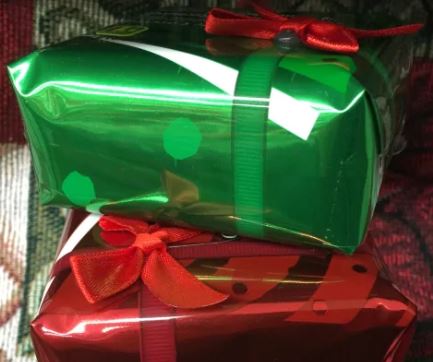 Christmas is a time of celebration, but once the party’s over, a huge amount of waste is generated.  From mid-November to mid-January, the average person generates about 25 per cent more waste than during the rest of the year.

The reason is people purchase more at Christmas  – from shiny wrapping paper to glittery cards — which typically can’t go in your recycling bin, so it’s destined for the landfill.

Here are some of the season’s worst offenders and tips for cutting down that holiday waste:

To avoid unnecessary waste, opt for the plainest wrapping paper. Different materials generally need to be separated before recycling, so any gift wrap involving foil, laminated or metallic coating or sparkles will likely be rejected by your green bin.

Even though it’s made of paper, because there’s this other coating, whether it be plastic, whether it be wax, it cannot be recycled.  Green bin programs also generally don’t want tinsel or gift leftovers such as bows, ribbons, cellophane and tape because these items are made of materials that are difficult to recycle.  On top of that, ribbons and tinsel are a recycling facility’s worst nightmare because they can get stuck in the sorting machines as they get jammed inside of the wheels which  causes massive disruption to the system.

If you’re shopping online, you may start piling up waste even before the gift wrapping begins. Much of the protective packaging used to ship goods, such as bubble wrap and foam chips, is also difficult to recycle and likely can’t go in your green bin.

Dark side of glitter

Glitter is all over the place during the holidays, used to jazz up things like tree ornaments, wrapping paper and Christmas cards. It also turns those items into waste because it’s virtually impossible to remove every sparkle from a product before it can be recycled.

And glitter has an even darker side — it could actually harm marine life. That’s because it’s typically made from plastic and has a habit of leaking into the environment.  Sprinkle glitter on Christmas cards and you can forget about putting them in your green bin.  “The little sparkles stick to your hands and they get stuck to your clothing and they end up going down the drain or being washed away into our water systems,” said Karen Halley, a spokesperson with GreenUP, an environmental community group in Ontario.

Glitter’s ease of travel makes it one of the many microplastic pollutants fish may wind up ingesting.  Scientists have become increasingly concerned about the negative impact of microplastics on aquatic life.  “It’s hard to think your Christmas bauble that you just bought is ever going to affect marine life, but it does happen,” said Halley.

There are many simple ways you can cut down on waste over Christmas: