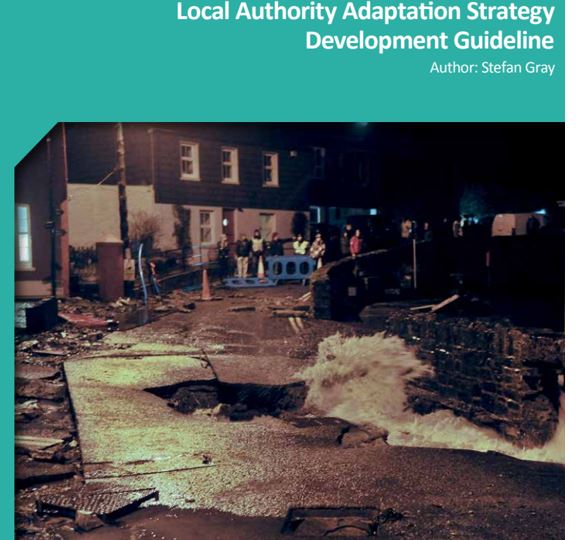 Local Adaptation Guidelines were originally published in 2016 as a research project under the EPA’s Climate Change Research Programme. They were revised with the assistance of the Climate Ireland research team in the Centre for Marine and Renewable Energy in UCC.

This year the Department announced funding to establish 4 Climate Action Regional Offices (CAROs) around the country to drive climate action at local level. As indicated earlier the CAROs will be crucial in building on and focusing the work that has been undertaken on climate action within local government so far.  The CAROs will have a key role in supporting local authorities in the development of their adaptation strategies in line with these new Guidelines. Adaptation planning is a new challenge for the local authority sector and will require new skillsets and capacities to be developed within each local authority over time.  While most of the interaction with CAROs from the Department to date has been on climate adaptation we are also keen to ensure the CARO structure contributes to national efforts to reduce greenhouse gas emissions thus building on local government’s existing inputs to the low carbon agenda in areas such as spatial planning, transport, biodiversity and the built environment.

At the 2018 Climate Innovation Summit in Dublin Castle last month, Minister Bruton said that he wanted to make Ireland a leader in responding to climate change, not a follower.  As the Minister said – this will require a significant step change across government.  Being a leader means acting now and seizing opportunities, being a follower means the final costs of adjustment are much higher and opportunities much lower or completely lost.  This requires a clear mandate to integrate the demands of climate action into the decision making of all regulatory systems and programme evaluation across government.

Costs and Impacts of Climate Change

The potential impacts and costs of climate change are significant. Early adaptation makes economic sense; figures compiled by the OPW estimate the current cost of a 1 in 10 year flood event in Limerick City at around €4 million. Under a medium emission future scenario this figure rises to €117 million. Under a high emissions future scenario this figure rises again to €358 million. These figures are even higher for 1 in 100 and 1 in 1000 year floods. Local authorities, with their key role in flood risk management as well as in emergency responses to flood events, will understand the value of being proactive in this regard.

As the Guidelines note, delivering adaptation actions encompasses taking a wide range of actions that can be soft, green or grey and may range from simple solutions in the immediate term to large scale longer term transformational projects. Building climate resilience will require a mix of such actions and will most likely require significant interaction with key sectors such as transport, energy, communications, agriculture, health and biodiversity.

The scope for local government to contribute to climate action cannot be underestimated.