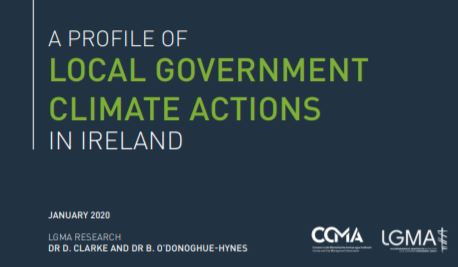 All 31 local authorities in Ireland are gearing up to play a leading role in reducing carbon emissions and helping the country adapt for the inevitable consequences of climate disruption, especially extreme weather events, according to Sligo County Council chief executive Ciarán Hayes.

Commenting on a report issued on Tuesday outlining how local authorities have increased climate actions since 2011, Mr Hayes said the bigger issue was what actions would be taken to address the emerging climate crisis.  He outlined a wide range of new measures that would be driven by local authorities working with other State agencies. Public lighting was the biggest energy cost for authorities, so €200 million was being spent to switch 280,000 lights to energy-efficient LED public lighting. This would bring a saving of €400 million and secure a carbon saving of national significance – second only to the benefit of closing fossil fuel power stations.

Local authorities were critical to acceptance of renewable energy, notably wind, with implementation of appropriate planning guidelines balanced by tangible “community gain” from projects. This would transform communities, sports clubs and schools, and fund other local climate actions.

Local authorities would be upskilling their 28,000 staff on climate mitigation and adaptation to build momentum in communities.

The report outlines how the local government sector has embraced sustainable transport development; flood risk management, water conservation, waste management and public engagement. This was ahead of the sector being named as a key driver of change under the Government’s national climate action plan.

The research by the Local Government Management Agency (LGMA) on behalf of the County and City Management Association (CCMA), found half of the 31 local authorities will achieve energy savings beyond their 2030 targets having invested more than €120 million in energy-efficiency projects.

CCMA chairman Michael Walsh, chief executive of Waterford City and County Council, said local authorities were critical to effective national action because of their closeness to communities and underlined the scale of the challenge.  Local authorities’ action had to be concentrated on both reducing emissions and on adapting for the inevitable impacts, such as extreme weather, said David Dodd, regional co-ordinator of the Dublin Metropolitan Climate Action Regional Office.

LGMA head of research Dr Bernie O’Donoghue Hynes, said the report with numerous case studies allows for local authorities to learn from each other and to recognise where additional action might be taken.

Between 2014 and 2018, 21 local authorities activated flood emergency response plans on 82 occasions and were required to spend €101 million on clean-up, road repair and disaster recovery. Local authorities collaborated with the Office of Public Works on 21 major flood defence schemes.

Water conservation initiatives have been extended because of the increased risk of climate-related droughts. Local authorities intervened on more than 300 occasions to provide drinking water supplies to residents following extreme weather events because of poor water quality or damaged water infrastructure.

In addition, local authorities planted 74,000 trees in 2017-2018, while many are implementing programmes on invasive alien species; managing trees and urban woodlands, developing green infrastructure, and reducing pesticide usage. Eight local authorities have incorporated, and four are in the process of incorporating, green roofs in council buildings as part of new buildings or building upgrades.