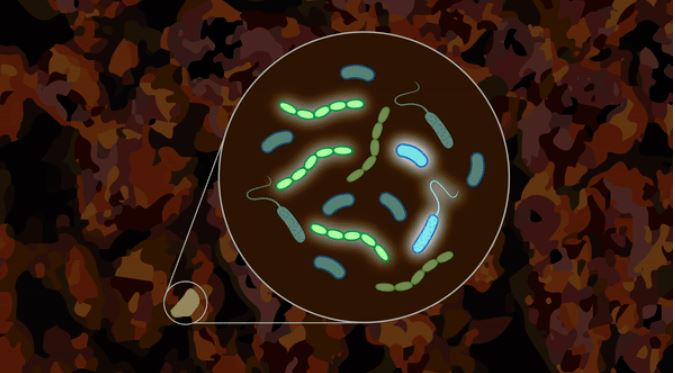 Long ago, during the European Renaissance, Leonardo da Vinci wrote that we humans “know more about the movement of celestial bodies than about the soil underfoot.” Five hundred years and innumerable technological and scientific advances later, his sentiment still holds true.  But that could soon change.

In a report published in Nature Communications a team of scientists from the Department of Energy’s Lawrence Berkeley National Laboratory (Berkeley Lab) detailed the first-ever successful use of a technique called BONCAT (bioorthogonal non-canonical amino acid tagging) to isolate active microbes present in a sample of soil—an achievement could enable a tidal wave of new research.

“Soils are probably the most diverse microbial communities on the planet,” said Estelle Couradeau, first author of the study. “In every gram of soil, there are billions of cells from tens of thousands of species that, all together, perform important Earth nutrient cycles. They are the backbone of terrestrial ecosystems, and healthy soil microbiomes are key to sustainable agriculture. We now have the tools to see who these species are, but we don’t yet know how they do what they do. This proof-of-concept study shows that BONCAT is an effective tool that we could use to link active microbes to environmental processes.”

For the past two years, Couradeau, her co-authors, and many other researchers from around the U.S. have been collaborating in a Berkeley Lab-led scientific focus area called ENIGMA (for Ecosystems and Networks Integrated with Genes and Molecular Assemblies) in order to dig deeper into the inner-workings of soil microbiomes. ENIGMA’s projects are a high priority for biologists and energy and Earth scientists not only because they help fill gaps in our knowledge of how the environment functions, but also because these fundamental insights could help applied scientists more effectively harness microbiomes to improve drought-resistance in crops, remove contaminants from the environment, and sustainably produce fuels and other bioproducts.

However, because most soil microbes won’t grow in cultures in a laboratory, and because of their truly mind-boggling abundance in their natural habitats, investigating which microbial species do what is incredibly difficult. “There are many barriers to measuring microbial activities and interactions,” said Trent Northen, lead author and director of biotechnology for ENIGMA. “For example, soil microbiomes that remove waste from underground water reservoirs are found hundreds of feet below the surface. And in some ecosystems, up to 95% of the microbes are inactive at any given time.”

Because direct observation is off the table, microbiologists typically collect environmental samples and rely on indirect approaches such as DNA sequencing to characterize the communities. However, most of the commonly used techniques fail to differentiate active microbes from those that are dormant or from the plethora of free-floating bits of DNA found in soil and sediment.

BONCAT, short for Bioorthogonal Non-Canonical Amino Acid Tagging, was invented by Caltech geneticists in 2006 as a way to isolate newly made proteins in cells. In 2014, Rex Malmstrom, Danielle Goudeau, and others at the U.S. Department of Energy (DOE) Joint Genome Institute (JGI), an Office of Science user facility managed by Berkeley Lab, collaborated with Victoria Orphan’s lab at Caltech to adapt BONCAT into a tool that could identify active, symbiotic clusters of dozens to hundreds of marine microbes within ocean sediment. After further refining their approach, called BONCAT Fluorescent Activated Cell Sorting (BONCAT+FACS), they were able to detect individual active microbes.

As the name suggests, BONCAT+FACS allows scientists to sort single-cell organisms based on the presence or absence of fluorescent tagging molecules, which bind to a modified version of the amino acid methionine. When fluid containing the modified methionine is introduced to a sample of microbes, only those that are creating new proteins—the hallmark of activity—will incorporate the modified methionine into cells.

In addition to being far more streamlined and reliable than previous methods of microbial identification, the entire process takes just a few hours—meaning it can tag active cells even if they are not replicating.

Given that some soil microbes are notoriously slow-growing, many scientists were immediately interested in applying BONCAT+FACS to terrestrial soils. After three months of experimentation and optimization, the team of ENIGMA and JGI researchers devised a protocol that works smoothly and, most importantly, gives very reproducible results.

“BONCAT+FACS is a powerful tool that provides a more refined method to determine which microbes are active in a community at any particular time,” said Malmstrom, who is also an author of the current study. “It also opens the door for us to experiment, to assess which cells are active under condition A and which cells become active or inactive when switched to condition B.”

Moving forward, BONCAT+FACS will be a capability available to researchers who wish to collaborate through the JGI’s user programs. Northen and Malmstrom have already received several proposals from research groups eager to start working with the tool, including groups from Berkeley Lab who hope to use BONCAT to assess how environmental changes stimulate groups of microbes. “With BONCAT, we will be able to get immediate snapshots of how microbiomes react to both normal habitat fluctuations and extreme climate events—such as drought and flood—that are becoming more and more frequent,” said Northen.

According to Couradeau, the team expects the approach will catalyze a variety of other important and intriguing lines of study, such as improving agricultural land practices, assessing antibiotic susceptibility in unculturable microbes, and investigating the completely unknown roles of Candidatus Dormibacteraeota—a phylum of soil bacteria, found across the world, that appear to remain dormant most of the time.

Reflecting on how he and his colleagues achieved a goal that many have been pursuing, Malmstrom cited the diversity of scientists within ENIGMA and JGI. “This a true example of team science, because no single person had or will ever have the expertise to do it all.”

Verde undertake characterisation of soils as required by landfill regulations and undertake the necessary sampling to assess whether a waste is classified as hazardous or non-hazardous. Our specialists are trained in the use of the appropriate classification tools and have an in-depth knowledge of the relevant legislation and guidance, which allows them to guide clients in establishing cost effective and sustainable soil management solutions.

Avail of Verde’s FREE Soil Waste Classification One Hour Seminar – a must for anybody involved in construction projects particularly where brownfield sites are being developed.