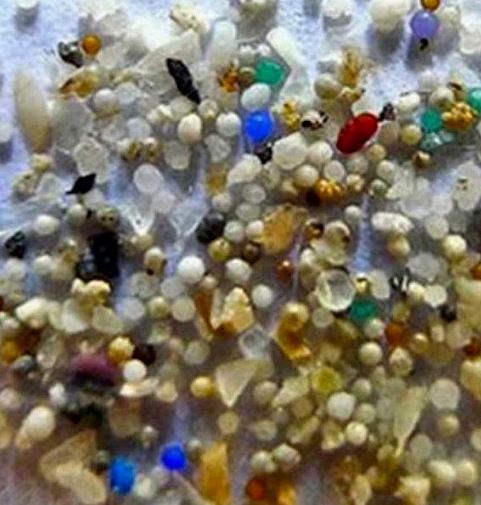 Microplastics in rivers have been found in much higher concentrations downstream from wastewater treatment plants, researchers have found.

In one of the first studies to identify potential sources of microplastics pollution, scientists from the University of Leeds measured microplastics concentrations up and downstream of six wastewater treatment plants in northern England.  All of the plants were linked to an increase in microplastics in the rivers – on average up to three times higher but in one instance by a factor of 69.  Microplastics (which include mircobeads) are tiny pieces of plastic with a diameter less than 5 millimetres. They come from a wide range of materials including tiny plastic beads found in health and beauty products, plastic fibres from clothing and plastic flakes that break down from packaging.

There is every likelihood that similar levels of microplastics are occurring in Irish wastewaters discharging into rivers, lakes and the sea.

The EPA has classified them as “a newly identified contaminant” in water sources, including drinking water, but said “the impact of them on people’s health has not yet been fully assessed and determined”.

A 2017 EPA study carried out by the Marine and Freshwater Research Centre at Galway-Mayo Institute of Technology identified plastic manufacturing and recycling industries; landfills, wastewater treatment plants and septic tanks as among the main sources of microplastics in Ireland. It is currently funding a further research project on microplastics in Irish freshwaters which is due to be completed by March 2020.

Irish Water confirmed treatment of public water supplies does not remove microplastics from drinking water, and the only option at this point is to remove them at source – potential extraction techniques are the subject of intensive research globally.

Lead author on the UK study Dr Paul Kay said microplastics were one of the least studied groups of contaminants in river systems. “These tiny plastic fragments and flakes may prove to be one of the biggest challenges in repairing the widespread environmental harm plastics have caused. Finding key entry points of microplastics, such as wastewater treatment plants, can provide focus points to combating their distribution.”

He said in addition to exposing river ecosystems to microplastics, a huge quantity continues to flow downstream and is then flushed into the ocean, posing a further threat to marine environments. Recent research has also found microplastics in fish stocks eaten by humans – a global study also detected their presence in nine varieties of bottled water.

The study published in Environmental Science and Pollution Research categorised the types of microplastics found into pellets/beads; fibres and fragments/flakes. “By categorising the types of microplastics we can identify what aspects of our lifestyle are contributing to river pollution,” Dr Kay added.  “Not that long ago microbeads in toiletries and cosmetics were the microplastics getting all the public attention. Seeing the amount of plastic microfibres from clothing and textiles polluting our rivers, we need to think seriously about the role of our synthetic fabrics in long-term environmental harm.”

A Green Party Bill proposing a ban on microplastics and microbeads was voted down last year when the Government indicated it would introduce its own Bill.  Labour TD Sean Sherlock introduced a similar Bill earlier this year. It is understood the Government is evaluating whether to back his Bill or introduce one of its own.

Verde Environmental Consultants has built a team of water resource assessment specialists who are focused on delivering quality hydrogeological services to our clients such as groundwater abstraction feasibility assessments, authorisation of discharges to groundwatertechnical assessments and water quality/level monitoring in rivers and lakes. The development of sustainable groundwater resources is a key element in helping our clients to reduce costs associated with the use of water.

Hydrogeological and Appropriate Assessment at a site in Co. Kildare

Irish Distillers Pernod Ricard Ltd, Cork – Assessment of the Risk Screening in accordance with Guidance on the Authorisation of Discharges to Groundwater