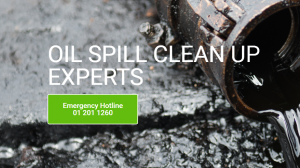 A Limerick family who claimed they suffered respiratory type problems as a result of an alleged leak of kerosene heating oil from another property on their housing estate has settled five different actions at the High Court for a total sum in the region of six figures.  The family who lived in The Meadows housing estate at Murroe, Co Limerick sued over breathing in fumes from an oil spill allegedly seeping into their property over a protracted period.

Ms Justice Bronagh O’Hanlon was told the action of the parents Graham and Jean French who now live elsewhere in Co Limerick were settled on confidential terms.  The judge approved settlements totalling €140,000 for the three French children Frederick (11), Oliver (10) and Hannah(8).  Senior counsel for the French family Michael J McMahon SC told the court the oldest of the children, Frederick who was four-years-old at the time had “a miserable time” and even suffered a partial lung collapse.

The French family he said had moved in to the Meadows estate in 2006 and in March 2011 had noticed a bad smell of heating oil in their home and garden.  They moved out of the house and later realised their children had suffered an excessive number of respiratory problems for four or five years.  The smell in 2011 Counsel said was very excessive and very noticeable and the French family had moved out in June 2011.

It was their case he said there had been an oil spill from the other property and the leak they contended was going on over a protracted period.  Counsel said Frederick who was born in 2007 had a miserable time and had an awful lot of respiratory problems and at one stage doctors thought he might have TB.  Counsel said he suffered a partial lung collapse and when the family moved from the house in June 2011 Fredrick’s health improved immediately.  Counsel said the French family have since sold the house and are building their own home in Limerick.

Graham and Jean French along with their children had sued David Rice and Louise Murphy who owned another house on The Meadows, Murroe, Co Limerick.

It was claimed that in March 10, 2011 oil, kerosene and petroleum hydrocarbons were allegedly allowed to leak or flow from the oil tank and or boiler and heating equipment located on the Rice/Murphy property and to seep on to the French property through drainage pipes and follow the natural fall of the ground between the properties. It was claimed the oil allegedly contaminated the soil and groundwater around the French property and below their foundations and back garden.

They claimed they were caused to breathe in the odours over a protracted period of time and allegedly suffered injuries.