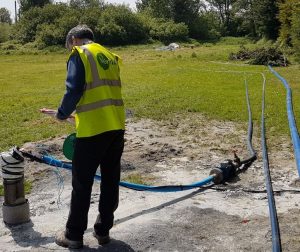 For human and ecosystem health, it is essential that groundwater used for water supply is clean. New research highlights how some aquifers
might be at greater risk of contamination than previously thought. Modelling fast flow infiltration — where surface water sinks through cracks — the study shows that significant quantities of water-borne pollutants (such as pesticides, veterinary medicines or human pathogens) may reach groundwater in carbonate rock before they degrade, demanding further investigation.

Large-scale studies on water security often focus on available quantity rather than quality, say the researchers behind this study, but localised investigations show that water entering aquifers (‘recharge’) can contain pollutants — even substances considered quick to degrade. In particular, this occurs in regions of karst geology, where fractures in weathered carbonate rock (a class of sedimentary rocks composed primarily of carbonate minerals) quickly channel water to the subsurface (or ‘focused recharge’). More than a fifth of Europe’s land surface features this type of geology, including parts of the Mediterranean, central and south-eastern Europe.

Pesticides approved for use in the EU must also be authorised at Member State level, based on a risk assessment, including the risk to groundwater, considering the specific local conditions and soils of that Member State. However, the researchers note that large-scale modelling has concentrated on ‘diffuse recharge’, where water percolates over a wide area. They therefore aim to redress the balance by investigating the risk of ground-water contamination from focused recharge. In particular, they highlight that agriculture occupies 40% of ice-free lands, yet there are no continental-scale assessments of the impact of degradable pollutants and focused recharge on ground-water quality.

To better understand the risk posed, the researchers model recharge processes over a 10-year period, 2002–2012, in Europe, North Africa and the Middle East, where groundwater provides up  to half the national water supplies. Accounting for variable subsurface properties and climate, the model simulates the dynamics of water infiltration to a depth of 30 metres. The researchers then compare downward travel (from the surface to the subsurface) times of water with degradation times of typical short-lived pollutants, to find the probability of them reaching groundwater before degrading.

The model reveals that focused recharge is the most important mechanism of rapid transit of water from land surface to groundwater. Less than 4% of diffuse recharge is rapid, while the share of focused recharge that reaches groundwater in one season (90 days) is up to 77% in
analysed areas characterised as Mediterranean, 50% in mountains, 46% in deserts and 41% in humid regions.

Focused recharge is also the primary transmitter of contaminants to groundwater. Where rapid flows occur, up to 50% of infiltrating pollutants may reach the ground-water table, the researchers find. They focus on three pollutants: Salinomycin (a veterinary drug common in manure), halflife (i.e. the time it takes for a certain amount of a substance to be reduced by half) 10 days; glyphosate (half-life 25 days); and Escherichia coli (a common pathogen, survival time 60 days). The model suggests that 10% of Salinomycin, 16% of glyphosate and 33% of E. coli contained in fast flows can remain in ground-water recharge.

Assuming realistic application rates, the simulation shows that chemicals such as glyphosate could exceed their permissible concentrations in groundwater in Europe (0.1 microgram per litre of water)1 by 3–19 times, when focused recharge occurs. This finding concurs with concentrations detected in a U.S. survey and with studies in Switzerland and Ireland,  they note. Areas of karst geology, thin soils and bare rock, where substantial levels of chemical application occur, may, therefore, warrant further investigation, in light of the risk that this study reveals.

The researchers acknowledge that their estimates only consider vertical infiltration and percolation. Their model accounts for depths of up to 30 metres. Pollutants may travel laterally and attenuate in transit, especially when travelling to deep ground-water systems. Concentrations may decrease through mixing with unpolluted water, and conditions at ground level may degrade pollutants more or less than modelled. The researchers, therefore, say that their results should be seen as an estimate and worst-case scenario

Verde Environmental Consultants has built a team of water resource assessment specialists focused on delivering quality hydrogeological services to our clients which are led by Donal Hogan, Senior Hydrogeologist who has over 22 years’ experience in hydrogeology related projects. In particular, he has extensive experience in groundwater development assessments to develop a potable and sustainable groundwater resource.