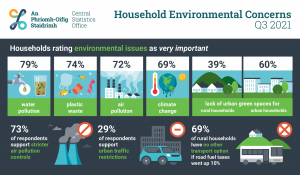 Most Irish households have serious concerns about water and air pollution but fewer than a third would support traffic restrictions or congestion charges to fight the problem.  By contrast, nearly three quarters favour stricter controls on industrial and energy-production activities, a new survey from the Central Statistics Office reveals.

In the first of four reports published today to coincide with the UN Climate Conference taking place in Glasgow this week, the CSO’s report on “Environmental Concerns Quarter 3 2021” found that over 79pc of Irish households rate water pollution as a very important environmental concern.

Climate change was also rated as an important environmental concern by 69pc of households.

The lack of urban green spaces was also cited as an important issue for 60pc of urban householders, yet only 39pc of rural householders cited it as an issue.

Yet despite concerns over air pollution, just 29pc of Irish households said they would support traffic restrictions – such as congestion charges or low emission zones – to ease pollution in cities while a majority of householders in rural areas (69pc) said they would have no alternative form of transportation if fuel taxes went up by 10pc.

The survey sample included a representative mix of owner-occupied, private rented and local authority rented dwellings. Households from every county were included in the survey.

CSO statistician Clare O’Hara said: ”The report found that 73pc of households would support stricter air pollution controls on industrial and energy-production activities as the most effective means of tackling problems of air quality. In contrast, only 29pc of households supported the introduction of traffic restrictions such as congestion charges and low emission zones in polluted cities.”

We provide all aspects of hydrogeological services such as groundwater abstraction feasibility assessments, authorisation of discharges to groundwater technical assessments and water quality/level monitoring. The development of sustainable groundwater resources is a key element in helping our clients to reduce costs associated with the use of water.