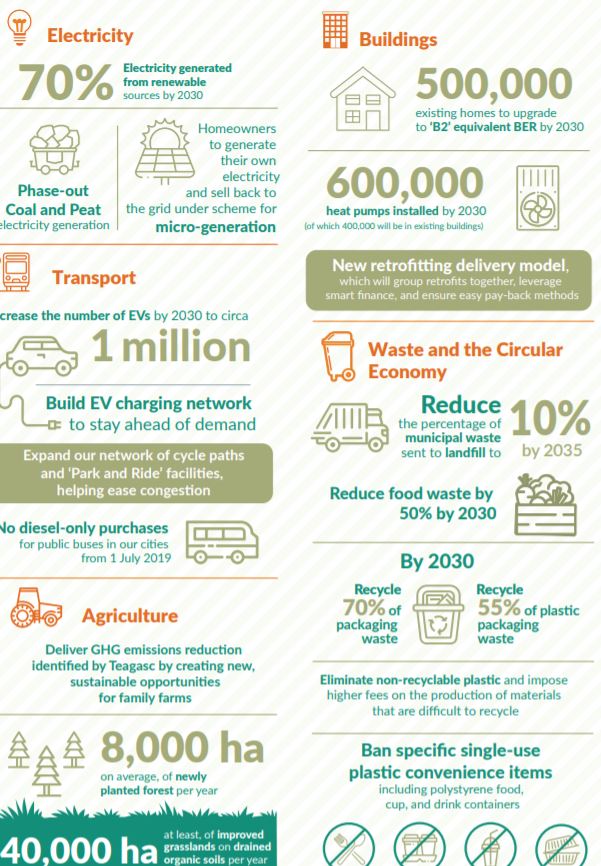 The aim is to make Ireland a world leader in responding to climate change. The Plan is ambitious, affecting almost every sector of the economy. The key difference however, between this Plan and previous ones is that it creates new governance structures necessary to implement the far reaching changes.

The key focus of the Plan is to identify how the Government plans to reduce Ireland’s growing greenhouse gas emissions. The goal is that Ireland will achieve its EU emission reduction targets for the year 2030. The Plan includes a new commitment to make Ireland 100% carbon neutral by 2050.

The Plan contains 183 action points designed to achieve our national climate change targets. The scale of the challenge is huge and the Plan identifies the need for everyone to contribute in tackling the challenges posed by climate change. It includes increased renewable electricity targets4 , the end of single use non-recyclable plastics and new building regulations. It will impact how our homes and businesses are heated, how we generate and consume electricity, how we travel and how food is produced.

Background – the driver for change

In late 2018 the Government committed to making Ireland a leader in responding to climate change. This stems from negative international publicity on Ireland’s climate position – international expert analysis deemed Ireland the worst country in the EU on climate action for the second year in a row last year. Ireland is set to miss its EU 2020 targets by some length5 . The Government did however receive positive feedback for enacting the Fossil Fuel Divestment Act 2018 and the Citizen’s Assembly process which produced far reaching recommendations for climate action. This, together with the recent Joint Oireachtas Committee Report on Climate Action6 was the major catalyst for the Plan.

The goal in the energy sector is to make Ireland less dependent on imported fossil fuels. To achieve this, energy needs to be decarbonised by harnessing renewable resources, particularly wind (both onshore and offshore), solar PV and biomass powered CHP.

The Plan envisages a radical step-up of our existing targets in order to meet the required level of emissions reduction by 2030, including:

The Plan sets out 4 key measures to meet these targets:

The transition to 70% renewable electricity will be made possible by a significant increase in onshore wind, offshore wind and solar PV. The recently announced Renewable Electricity Support Scheme (RESS) 7 will be a key policy measure to drive this growth. It is hoped that RESS will be open for applications by the end of 2019. However, given that the detailed auction design and State Aid approval are still awaited, that deadline may well slip into Q1 or even Q2 of 2020.

Although RESS is expected to be designed as a series of technology neutral auctions based on the lowest levelised cost of energy (LCOE), the Government has set out the following indicative levels of renewable electricity generation in the Plan:

The massive increase in offshore wind capacity8 will require putting in place a new planning and consenting regime and a new grid connection framework for offshore wind that aligns with the RESS auction timeframes. Enhanced interconnection will also be required. In this regard the Plan makes specific reference to the planned Celtic Interconnector to France and further interconnection to the UK.

Removing fossil fuels from the grid will be essential in the coming years. There are plans to replace coal fired generation with low carbon and renewable technologies. Bord Na Mona are committed to transitioning away from peat by 2028. There will be an end to coal burning at ESB’s Moneypoint generation plant by 2025.

There will be a change in the electricity market rules in early 2020 in order to enable micro-generated electricity to be sold by businesses and householders to the grid. The Plan provides this should include provision for a feed-in-tariff for micro-generation to be at set at least at the wholesale price point. Mechanical electricity meters will be replaced by new smart meters in households by 2024 under the Smart Metering Programme.

Energy Efficiency in other sectors

The Plan also focuses on energy consumption in areas such as buildings, agriculture, enterprise, waste and transport. With buildings, the government plans to give further attention to energy and carbon ratings in all aspects of managing assets. In the enterprise and service industries, the government plans to embed energy efficiency, replace fossil fuels, give careful management to materials and waste, and carbon abatement across all enterprises and public service bodies. In transport, the Plan envisages an increase in the number of electric vehicles to one million by 2030, which will in turn drive the demand for renewable electricity.

What’s different about this Plan?

As mentioned above, one of the key difference between this Plan and previous plans in this area is the focus on governance and implementation. The Plan puts in place new structures to ensure that its goals can be delivered. It proposes the following new measures:

The increased focus on offshore renewable energy will undoubtedly be welcomed by those in the sector. Ireland’s coastline has been identified as one of the most energy productive in Europe and the Plan provides a great opportunity for the industry to benefit from the Government’s new direction. However, in order for these ambitious offshore wind targets to stand any chance of being met by 2030, we need urgent action on the long awaited MAFA bill9 which has been in gestation since 2013.

The solar sector will no doubt be disappointed in the indicative target of only 1.5GW up to 2030. The stated reason in the Plan is that solar PV is “not showing as cost effective in MACC”10. This is presumably because of the low capacity factors of solar PV in Ireland compared with other countries. However, proponents of solar PV will point to the falling costs and rapid deployment opportunities in the solar sector.

The onshore wind sector in Ireland has a proven track record in delivering installed renewable capacity and it will relish the opportunity to rise to the challenge of a doubling of that capacity over the next 10 years. The upcoming RESS detailed design paper and the long delayed Wind Energy Planning Guidelines will be key in determining whether onshore wind can deliver the 8.2GW target by 2030.

One disappointing factor from an energy perspective was the absence of a clear action on private networks. Action point 22 contains a somewhat vague commitment to “consider facilitation of private networks/direct lines”. The prohibition on direct lines and private networks has long been a source of frustration to developers and is seen by many as an indirect attempt by the DSO to retain its monopoly over grid ownership and operation. Private lines are a common feature in many other jurisdictions and are actively encouraged under the new EU Clean Energy Package. Let’s hope that progress can be made in the short term in removing the barriers to private networks and direct lines between generators and large demand customers.

Whether the targets in the Plan are purely aspirational, time will tell. Unlike previous Plans and policies there is a clear focus on the governance and structural measures necessary to give effect to the Plan. This clear focus on implementation and accountability for the actions points set out in the Plan may be the missing ingredient to date and mark a new departure in the battle against climate change.