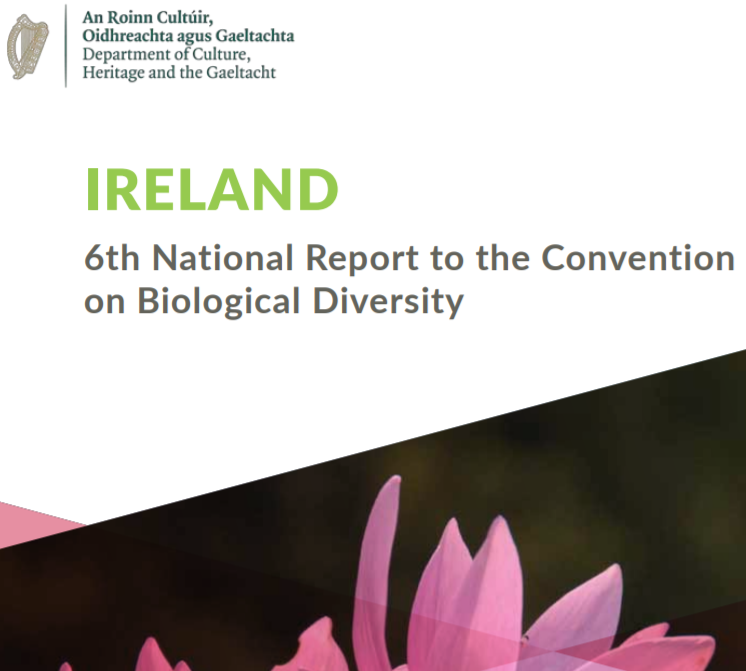 The 6th National Report reviews Ireland’s progress on achieving the 20 Aichi Targets in the CBD Strategic Plan for Biodiversity 2011-2020.

In summary, progress that is partially effective is reported for many of the national and global targets – however, this progress is at an insufficient rate. A transformational change is required to achieve the vision in the National Biodiversity Action Plan 2017-2021 – ‘That biodiversity and ecosystems in Ireland are conserved and restored, delivering benefits essential for all sectors of society and that Ireland contributes to efforts to halt the loss of biodiversity and the degradation of ecosystems in the EU and globally‘.

In common with other countries, biodiversity in Ireland is impacted by habitat loss, changes in land use, pollution and climate change. Most rural land in Ireland is under agricultural production (mainly pasture for cattle and dairy with some arable) or commercial forestry;  improved farm productivity has been encouraged in the agricultural sector in particular. According to the most recent (Article 17) Report to the EC on the implementation of the EU Habitats Directive in 2013[1], 52% of listed species were identified as being in ‘Favourable Conservation Status’. 1 20% of species were assessed as being in “inadequate status” and 12% were assessed as being in “bad status”. 10% of species showed a declining trend since the previous report compared with 6% which showed an improving trend.