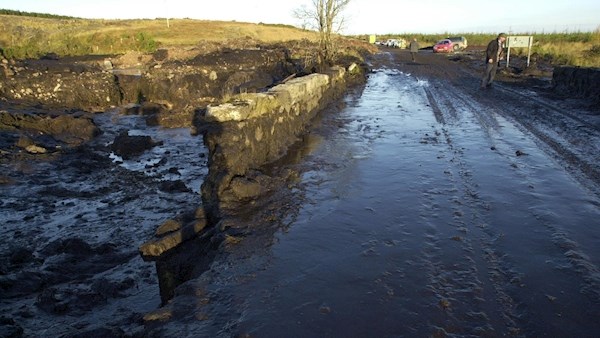 The EU’s top court has said Ireland should be subject to large daily fines, already amounting to almost €4m, for failing to comply with EU legislation that might have prevented landslides caused by the construction of a wind farm in 2003.

A legal opinion issued by the Court of Justice of the EU (CJEU) has proposed that the State should be handed a daily fine of €1,000 for every day since its earlier ruling on July 3, 2008, until it achieves compliance with EU environmental legislation on assessing the impact of the development of a wind farm at Derrybrien in south Galway. Such a fine, if confirmed by the full ruling of the CJEU later this year, would result in a figure of €3,998,000 to date.

The opinion by a CJEU advocate general Givoanni Pitruzzella also recommended that the Government should face a daily fine of €10,000 until it meets its obligations following the full ruling in the present case.  The European Commission brought the legal proceedings against Ireland over its alleged failure to comply with the judgment in relation to the Derrybrien wind farm, which was the location of a 2km landslide on October 16, 2003.  Tonnes of peat were dislodged from an area under development for the project and polluted the Owendalulleegh River, resulting in the death of 50,000 fish and causing lasting damage to fish spawning beds.

The CJEU subsequently ruled that Ireland had failed to fulfil its obligations as an EU member state by not carrying out any assessment of a project likely to have significant effects on the environment prior to the granting of planning.

The Government claimed the courts were likely to block any attempt by it to force the operator of the Derrybrien wind farm to submit a substitute consent process and that a remedial environmental impact assessment, sought by the European Commission, could only be obtained with the voluntary co-operation of the wind farm operator. It claimed the delays in adopting measures to implement the 2008 ruling were also due to the complexity of the underlying legal issues.

Mr Pitruzzella disagreed that the issue raised such legal complexities as to justify “a virtual stalemate for more than 10 years”. He claimed that not only had no environmental impact assessment been carried out on the wind farm over the past decade, but Ireland took “no concrete measures” to obtain such a report. He said all explanations put forward by the Government for the delay had to be rejected.  Saying the non-compliance was at a most serious level and its duration excessive, Mr Pitruzzella said Ireland had never disputed the fact that the landslide was caused by construction work on the wind farm. Therefore, he said it could not be ruled out that a prior assessment of the environmental effects might have prevented the damage.

At the time, Derrybrien was the biggest ever wind farm in the Republic and one of Europe’s largest, with 70 turbines. Its construction required the removal of large areas of forest and extraction of peat up to a depth of 5.5 metres.  Last year a commission spokesman said the site could still benefit from mitigation and remediation measures which could be identified by an environmental impact assessment.

The Department of Housing, Planning and Local Government said it had been in regular communication with Brussels on the issue and remained committed to ensuring that an appropriate environmental review of the wind farm took place.