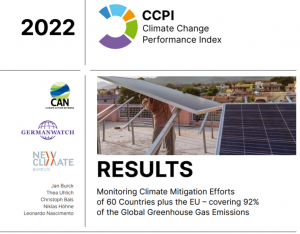 Ireland’s ranking in addressing the climate crisis continues to be in the “low performance category”, and has declined by 7 places over the past year, according to the 2022 Climate Change Performance Index (CCPI).

Ireland ranks 46th in this year’s listings, down from 39th place in 2020, in spite of scaling up ambitions and adopting more demanding emission targets, which were encapsulated in the new Climate Act passed by the Government this year.

In the greenhouse gas (GHG) emissions category, Ireland “remains among the very low performers”, and also receives a low rating in the climate policy category in the CCPI which was published at Cop26. 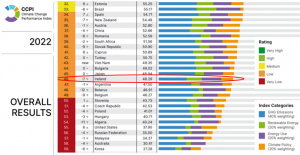 The CCPI analyses and compares climate actions including policies across 60 countries plus the EU as a whole which account for 90 per cent of global emissions.  It is regarded as the most reliable indicator of countries’ response to climate disruption, and has been published yearly since 2005. It has also played a leading role in setting out progress on implementing the Paris agreement.

Scandinavian countries, together with the UK and Morocco, lead the “race to zero” while Australia, South Korea, Russia, Saudi Arabia and Kazakhstan are among the worst performers.

Ireland’s national climate policy is still rated low “although new policies have been developed, they have not yet been fully adopted and implemented”.  As it did last year, the country receives a high rating in the renewable energy category – which relates mainly to using renewable energy in power generation – but gets a medium rating in energy use, which relates to energy efficiency.  CCPI experts, however, “acknowledge the progress being made with the new Climate Act and other positive commitments”.

Their report accepts “the new Act serves as a framework for improved climate action and includes five-year emission budgets and a commitment to a 51 per cent emissions cut (versus 2018 levels) by 2030, as well as improved governance and accountability measures”.

But its experts – including climate and energy specialists and NGOs based in Ireland – highlight “risks associated with weak implementation across Government”.

Other issues raised include risk of fossil gas lock-in from increasing demand due to projected data centre development, “as well as the potential for lower action in the agriculture sector to result in increasing pressure on the rest of society”.

“Broad and systematic dialogue with all relevant stakeholders and communities is essential in this regard,” the CCPI report notes, while highlighting other major shortcomings in the transport and forestry sectors.

As has been a persistent issue with CCPI ratings for Ireland, it “exhibits very low performance in the GHG emissions category, with a high current GHG per capita level of 13.1 tonnes of CO2equivalent”.

The main demand the experts expressed was for climate action plans to align with the Paris agreement so Ireland does its fair share and endeavours to reach net-zero emissions before 2050, an increased focus on ending fossil fuel heating in homes through comprehensive retrofitting programmes particularly for those at risk of fuel poverty.  “Additionally a phase-out plan for fossil fuel subsidies and implementation and transition of Ireland’s climate goals across all relevant sectors is demanded. Ireland now plays a more progressive role in international climate policy,” the report notes.

Experts who contributed call for “increased engagement in initiatives (such as the Beyond Oil and Gas Alliance), climate finance, and for the country to follow an ambitious carbon target aligned with the Paris Agreement”.

National experts who contributed to the policy evaluation chose to remain anonymous, the report confirms.

Leaders Denmark, Sweden and Norway occupy ranks four to six the latest rankings presented by Germanwatch, NewClimate Institute and Climate Action Network. Places one to three again remain vacant because no country’s measures, thus far, have been sufficient to achieve an overall “very high” rating with none following a path necessary to keep global warming within the 1.5-degree limit.