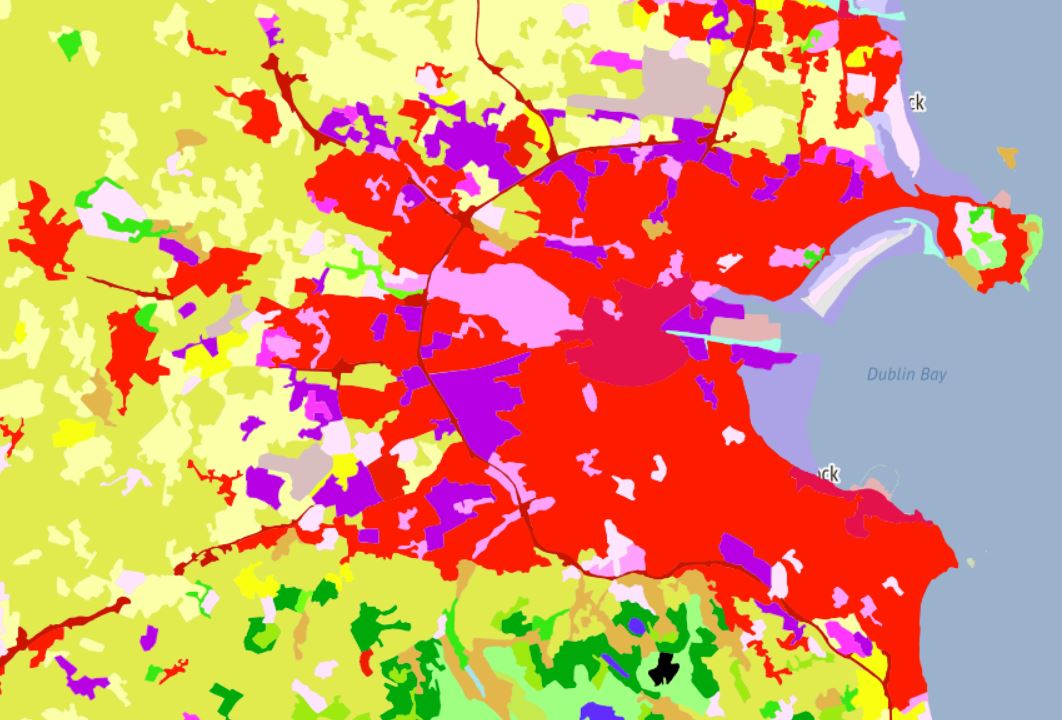 Ireland is one of the few countries in Europe that does not have precise and detailed maps of how land is used and how land use is changing over time.  As we become more alert to the high levels of greenhouse gas emissions from agricultural land use and the detrimental effects of climate change on land, experts agree that clear and accurate information on the different types of land cover and land use will be one of the best ways to make decisions about land use into the future.  For example, planning for infrastructure and housing to accommodate the predicted population growth of 1,000,000 by 2050 would be much improved with detailed knowledge of land vulnerable to coastal erosion or flooding.

Which parts of Ireland will best be suited for crops, grassland and forestry and where habitats are at risk and where carbon sinks will work best will also be helped by more precise land-cover maps.  Currently, the most accurate land-cover maps for Ireland come from a pan European dataset produced by member states for the European Environment Agency (EEA).  These so-called Corine (Co-ordinated Information on the Environment) maps are produced every six years. The latest, which was published in 2018, provides basic information on land cover (agricultural areas, wetlands, forest, semi-natural and low vegetation and artificial surfaces).

However, the Environmental Protection Agency (EPA), which gathers the Irish information for the EEA, points out that the pan European nature of the land-cover classification means that the Corine maps do not take into account specific details of the Irish landscape.  And while these pan-European maps do include changes to land use, they are limited by a data resolution of 25 hectares, which means that land-cover areas below 25 hectares are not included. For example, one researcher points out the satellite-based data can’t accurately pick out different types of peatlands which – considering almost 20 per cent of Irish land is peatland – is a huge loss of information.  Irish researchers have been aware for some time that the lack of accurate data on land cover has prevented accurate monitoring and assessment of land use and therefore the ability to accurately predict and prevent pollution, flooding and other effects caused by climate change, urban sprawl and agricultural practices.  As far back as 2012, a working group on Irish land cover and habitats was formed with members from the Environmental Protection Agency, the National Parks and Wildlife Service, the Ordnance Survey Ireland, the Heritage Council, Teagasc, the Geological Survey of Ireland and Government Departments for Agriculture, Housing and Heritage and Rural Affairs.

A plan has since been put in place to devise a national land-cover and habitat map for Ireland, drawing on data from Prime 2, the new high resolution national mapping database from the Ordnance Survey Ireland (OSi) and free access to the earth observation imagery from the European Space Agency’s Sentinel satellites.

The resolution of the new data will also be at least 25 times more detailed. “When combined, this detail on classes and data resolution will facilitate a much better calculation of our carbon emissions and sequestration and highlight how land management might be improved in the future in co-operation with all the relevant stakeholders,” Smith adds.

Using the new national land-cover data collection methodology and land classification system, a pilot area in Carragh, Co Kerry, was chosen to test the new model. And experts were satisfied remote sensing analysis of data from imagery from the European Space Agency’s Sentinel 2 satellites; the OSi’s new high resolution national mapping database, and forestry and agricultural data from the Department of the Agriculture, combined with field data collected by the Kerry Life project team, was precise enough to allow implementation of a national land-cover map for Ireland.

The EPA is supporting the OSi to complete the mapping methodology and from September, the mapping process will begin across Ireland with the aim to have it completed by the end of 2020.

Prof Gary Lanigan, principal researcher for Teagasc on greenhouse gases, climate change, environment, soils and land use says having more precise land-cover and habitat maps will make it easier to identify priority areas that are either in danger of habitat fragmentation or to identify where habitat corridors will have the maximum impact in preserving biodiversity.

Lanigan says that in terms of agricultural greenhouse gases and carbon sequestration the usefulness of the new land-cover maps may be more mixed. “Accurate land cover in many ways is only as useful as the underlying soils map. For about half the State where we have the old and very accurate soils map, it can make a big impact in, for example, identifying areas of land in agricultural production that are on peat soils.  These areas need to be treated in an entirely different way to our orthodox management in terms of say drainage, fertilisation etc. However, in the areas where we subsequently soil mapped over the last few years, it is still very valuable but requires ground truthing [checking data on the ground compared to satellite imagery] vulnerable areas.”

In general, an accurate land use and especially land management map offers the prospect for more accurate estimation of ecosystem carbon sinks and also to identify areas most at risk in terms of water quality, N2O or degradation in biodiversity.  Dr Catherine Farrell, researcher in Trinity College Dublin on the Incase research project is mapping two pilot sub-catchment areas for both land use and habitat in Ireland. She says that the interpretation of the data from new land-cover maps will be crucial.  “Having a national land-cover and land-use map will allow us to take a more practical and proactive approach to managing the wider landscape for agricultural, forestry, urban development and nature. All these aspects will need to be approached in an integrated land use planning system with climate action plans, agricultural and forestry targets, as well as plans for nature.”  She adds: “Having more information about land habitat cover and land use, soil types [eg peat soils], overlain together, will help us manage and promote natural areas – such as native woodland cover along rivers and streams – to prevent water pollution and flooding in the future.”  The approach is aligned with systems thinking as opposed to managing land with a singular purpose or mindset, and ultimately makes for better informed decision making at all levels.