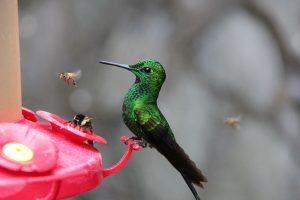 Ireland must make ‘considerable effort’ to protect its wildlife and natural habitats, as a new report shows countries who signed up to an international pledge to protect nature, failed to meet any of their joint targets.  Ireland is among the 194 signatories to the Convention on Biological Diversity (CBD) that adopted a set of aims called the Aichi Targets ten years ago with a deadline of achieving them by 2020.

The final report on the exercise has revealed that none of the 20 targets were achieved although six of them partially succeeded.  “The natural world is suffering badly and getting worse,” the report states. “Biodiversity is declining at an unprecedented rate, and the pressures driving this decline are intensifying. Humanity stands at a crossroads with regard to the legacy we wish to leave to our future generations,” warned CBD executive secretary, Elizabeth Maruma Mrema.

The report notes some “bright spots” that illustrate where targeted conservation efforts prevented extinctions, how fish stocks recovered when fisheries were well-managed and how legal protections could be extended to more of the land and oceans.  But it said such efforts would have to be dramatically scaled up to have a hope of fulfilling the CBD’s overall aim of societies living in harmony with nature by 2020.

In its profile of Ireland, the CBD says: “The majority of Ireland’s important habitats have an unfavourable overall conservation status, particularly raised and blanket bogs, sand dune systems, fens and mires, natural grasslands and woodlands.”

It says it will take “considerable management effort to improve this condition and reduce the impacts of pressures”.  It notes that several types fish, shellfish and other fresh water species have a ‘bad’ or ‘poor’ conservation status. “The critical situation of some of the more sensitive species, such as the freshwater pearl mussels, underlines the urgency of improving water quality in key areas,” it says.  It also warns: “Additional pressures on a number of species and habitats are likely to arise if Ireland undergoes climatic changes according to predictions.”

The report acknowledges the progress Ireland has made in setting up a biodiversity database and noted that 295 draft conservation management plans have been produced for protected areas, although they should have had fully agreed plans by now.

This is the second report in less than a week to lay bare the fragile state of nature. The World Wide Fund for Nature’s Living Planet Report showed that two-thirds of the world’s wildlife had vanished since the 1970s.

The CBD has now set out eight actions that are vital to slowing the rate of decline. They include conserving intact land and forests and restoring those damaged; adopting sustainable agriculture, fishers and food production, improving water quality, making room for nature in cities and towns and halting climate change.