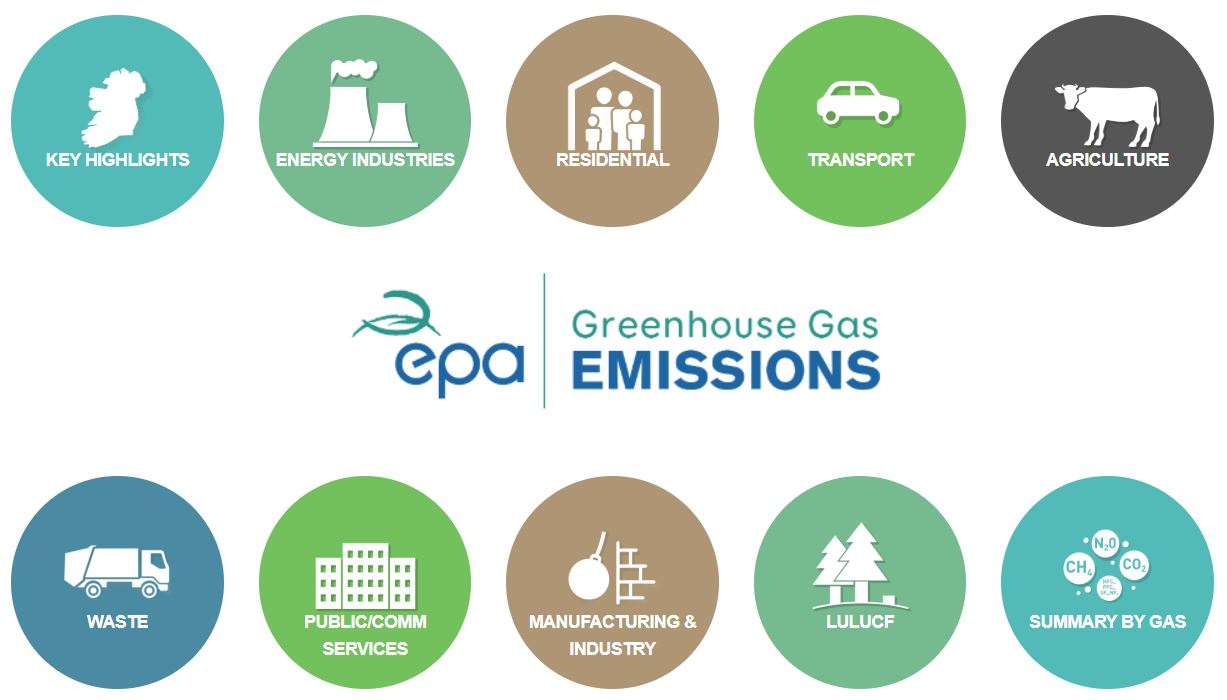 Ireland exceeded its annual EU emissions budget by over five million tonnes last year, new data from the Environmental Protection Agency (EPA) reveals.  Provisional data released by the environmental watchdog shows that our overall emissions dropped by just 0.2 per cent in 2018 to 60.5 million tonnes, leaving us well off track to meet our 2020 climate targets. This is the third year in a row that we have missed our European emissions budget.  Ireland’s national policy position is to reduce CO2 emissions by 80 per cent on 1990 levels by mid-century across energy generation, the built environment and the transport sector.

The EPA said, however, the data is clear that Ireland is “falling short” in terms of achieving carbon neutrality by 2050 and “playing our part in responding to global climate change”.  The minor decrease in overall emissions resulted from significant reductions in the energy sector that was offset by a rise in emissions from households, transport, and agriculture.  The 11.9 per cent (1.38 Mt CO2eq) drop in emissions from power generation was driven by the fact the ESB’s coal-powered Moneypoint station was offline for several months last year due to issues with its turbines.

Household emissions went up by 7.9 per cent (0.46 Mt CO2eq), mainly owing to an increase in fuel use during the cold winter. Emissions dropped in 2017 as the winter was warmer than normal.  “This increased demand for home heating – with oil still the predominant heating fuel – reflects the scale of the challenge to increase the resilience of our housing stock to extreme weather events, in terms of energy efficiency and use of renewable energy,” the EPA warned.

Transport emissions went up by 1.7 per cent (0.20 Mt CO2eq) last year, the fifth year in six that the sector has seen a bump in figures. In 2017, emissions dropped slightly due to a fall in cross-border fuel tourism due to currency fluctuations linked to Brexit.  The widespread transition to electric vehicles, increased use of public transport and a reduction in car journeys is the key solution to tackling transport emissions, the EPA said.

Agriculture emissions – our largest emitting sector – went up 1.9 per cent (0.38 Mt CO2eq), driven by the continued increase in dairy cow numbers – up 27 per cent in the last five years alone.  The EPA’s Stephen Treacy said that the trends in agriculture and transport are particularly worrying as they were “largely driven by increased activity. Emissions in these sectors are still closely coupled with economic growth. Breaking this link requires urgent behavioural change across all sectors of Irish society,” he added.

Responding to the latest figures, the Minister for Climate Action Richard Bruton TD said that Ireland has “drifted off target” and “must implement a decisive policy shift each year, every year.  While the EPA’s statement today shows that emissions have fallen for a second year in a row, the decrease is too small and driven by temporary occurrences – primarily the temporary closure of Moneypoint.”

The EPA is calling for the swift implementation of actions in the Government’s new climate action plan that contains hundreds of actions across every sector of society, including ramping up renewables, increasing electric transportation infrastructure and nationwide retrofitting.  The plan sets out five-year carbon budgets and sectoral targets per department, with penalties to be enforced for a failure to deliver on targets.

The EPA has also launched a new emissions web resource to provide more user-friendly information, including graphs and tables and a function to allow users to perform their own additional analysis.