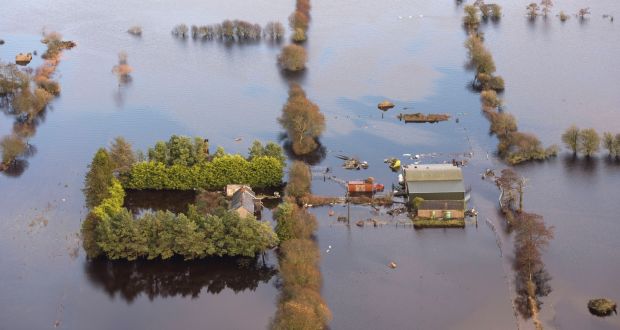 Ireland and other parts of northwestern Europe will bear the brunt of increasingly severe flooding caused by climate change, according to a new Europe-wide study.  The study, published last week in the journal Nature, analysed records from 3,738 flood measurement stations across Europe taken between 1960 and 2010.

This found the impact of flooding in Europe had increased over the past 50 years – and that this can be directly attributed to global warming. It is the first time the trend has been proven, according to Dr Conor Murphy of the Irish Climate Analysis and Research Units at Maynooth University who was involved in the research.  The findings, by 24 research centres including the Maynooth college, will force states to make flood management strategies more robust as the frequency of extreme floods in river systems is likely to increase from one-in-a-100-year event to one-in-80-year, and possibly one-in-50-year event.

The study was led by Vienna University of Technology (VUT) with Irish input from Dr Murphy.  He said the study “adds to a growing body of evidence which shows that flood magnitude has increased in northwest Europe, including Ireland, over the last five decades … the [most extreme] flood expected every 100 years at the start of our analysis is now expected, for example, every 80 years.  “Flood management must adapt to the realities of our changing climate and associated flood risk over the coming decades. Incorporating the evidence of increasing flood risk into engineering design and general flood management would ensure we are better prepared.”

Prof Günter Blöschl of VUT said: “We already knew that climate change is shifting the timing of floods in a year, but the key question had been -‘Does climate change also control the magnitude of flood events?’ Our study finds there are consistent patterns of flood change across Europe … in line with predicted climate change impacts, such as a contrast between increasing flooding in the north and decreases in the south.”

Dr Murphy said it had long been suspected that human-induced climate change was having an impact on the magnitude of floods because a warmer atmosphere can store more water, though this is not the only factor leading to flood changes in a warming world.

The researchers analysed records from 3,738 flood measurement stations across Europe taken between 1960 and 2010. In northwestern Europe floods are increasing because “flood generating rainfall” (annual maximum seven-day rainfall totals) is increasing and soils are becoming wetter.  “The largest increases are evident for northern England and southern Scotland, but across Britain and Ireland as a whole, flood magnitudes have been increasing at a rate of about 5 per cent per decade since the 1960s,” Dr Murphy explained.

In southern Europe, declining rainfall and higher temperatures are causing increased evaporation of water in soil. “However, for small Mediterranean rivers, floods may be becoming larger due to more frequent thunderstorms and land management changes such as deforestation,” he added.  In eastern Europe, flood levels are decreasing due to “shallower snow packs in winter associated with higher temperatures”.

With the total annual bill from flood damage – estimated to be $100 billion worldwide – continuing to rise, along with devastating impacts on communities, he advised policymakers to include their findings in flood management strategies.  “In northwestern Europe, what was the 100-year flood discharge in 1960 has now typically become a 50- to 80-year flood discharge, potentially making levels of protection offered by existing flood defence structures less safe.”  This invariably meant “standards of protection declines over time”, so infrastructure built in the 1960s in Ireland was no longer adequate to cater for the magnitude of flooding now predicted.