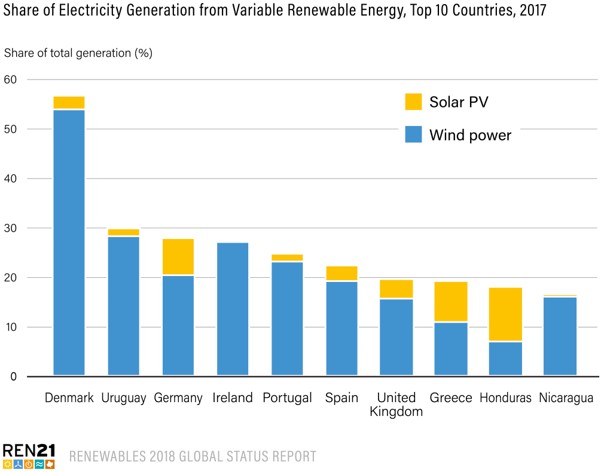 Renewable power accounted for 70% of net additions to global power generating capacity in 2017, but global energy-related carbon dioxide emissions rose 1.4% in 2017, after three years of holding steady. The increase in carbon emissions was the result of robust global economic growth (of 3.7%), lower fossil fuel prices and weaker energy efficiency efforts.

This year’s Renewables 2018 Global Status Report (GSR) reveals two realities: one in which a revolution in the power sector is driving rapid change towards a renewable energy future, and another in which the overall transition is not advancing with the speed needed. While momentum in the power sector is positive, it will not on its own deliver the emissions reductions demanded by the Paris climate agreement or the aspirations of Sustainable Development Goal 7. The heating, cooling and transport sectors, which together account for about 80% of global total final energy demand, are lagging behind.

But the news is not all bad. Renewable power generation capacity saw its largest annual increase ever with an estimated 178 gigawatts added globally. New solar photovoltaic generating capacity alone was greater than additions in coal, natural gas and nuclear power combined.