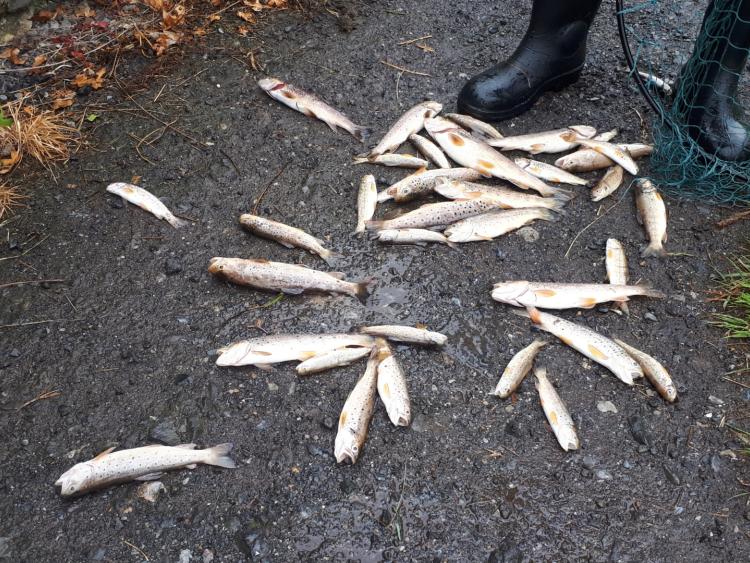 Inland Fisheries Ireland has confirmed that “thousands of fish have been killed over a 6.5 stretch” of the Owenass river in Laois.  The river rises in the Slieve Bloom Mountains and flows through Mountmellick town and on into the Barrow river, both Special Areas of Protection. It was hit late last week by pollution with more and more fish found dead as days went by.

The fish killed are mainly wild brown trout. Mountmellick Angling Club has also found dead young salmon, crayfish, plaice and even minnows which they say show how serious the river is affected.

IFI confirm that silage effluent appears to be the cause, with their investigation continuing.

“The investigation continues into the source of the fish kill continues however it would appear at this early stage that silage effluent was the potential cause of the mortality,” the IFI has said in a statement to the Leinster Express.

Asked what can be done to clean the river now, and how much damage is done longterm to wildlife in and along the river, the IFI said it will take years to fix.  “Once the pollution source has terminated the river will return to normal water quality. It would appear the source of the pollution has now been contained. It will take a number of years for brown trout to re-populate the river from unaffected stretches of the river”.

A prosecution may be considered. “Inland Fisheries Ireland has commenced an investigation, the findings of which will determine whether a prosecution is the appropriate action. The investigation is still in its early stages,” IFI said.

In 2018, IFI initiated 83 prosecutions cases for breaches of fisheries and environmental legislation – 52 related to fisheries offences and 31 to environmental offences. The fines imposed were at the discretion of the judge.

Inland Fisheries Ireland has appealing to farmers to remain vigilant during the summer months when harvesting silage and spreading slurry to avoid water pollution and the loss of nutrients into rivers, lakes and other watercourses.

“Silage operations will be ongoing all summer and silage effluent has the potential to cause devastating pollution in streams and rivers. Such effluent is a significant polluting substance, starving fish and invertebrate life of oxygen, resulting in potentially massive fish kills if it enters a watercourse. With some rivers low during summertime with little dilution capacity, the effect of a small leak can cause huge damage.”

Inland Fisheries Ireland has a confidential hotline number to enable members of the general public to report incidents of water pollution, fish kills and illegal fishing – 1890 34 74 24 or 1890 FISH 24.  visit www.fisheriesireland.ie.

Verde Environmental Consultants has built a team of water resource assessment specialists who are focused on delivering quality hydrogeological services to our clients such as groundwater abstraction feasibility assessments, authorisation of discharges to groundwater technical assessments and water quality/level monitoring. The development of sustainable groundwater resources is a key element in helping our clients to reduce costs associated with the use of water.