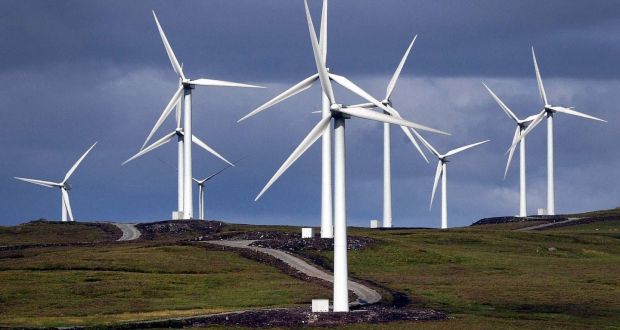 The European Commission has issued its starkest warning yet of economic penalties facing the Government due to lack of progress in decarbonising Irish society and in adopting renewable energy.

It adds: “Only limited progress has been achieved in decarbonising key parts of the economy, mainly in agriculture, road transport and the residential sector.”

This will make it necessary for Ireland to “use available flexibilities”, it adds. This means that after 2020 the Government will have to buy renewable energy and emissions credits from other compliant EU member states.

Based on current emissions and shortfall on renewable energy targets, this would amount to an estimated €400 million to €600 million payable per year until the country complies with its legally-binding commitments.

National projections highlight the scale of additional efforts needed, the commission points out, as emissions are expected to increase up to 2025, before stabilising at a level slightly below 2005 emissions. It said “on the basis of existing policies” most EU countries are already achieving reductions in emissions, which contribute to global warming.

The new National Mitigation Plan, it notes, “lays out a roadmap towards a low-carbon economy and a framework to tackle persisting challenges in the energy sector”. The commission finds “as it stands, however, the plan offers few specific new mitigation measures”.

On the report issued on Wednesday, Green Party leader Eamon Ryan said: “Ireland is failing to make any progress in decarbonising the economy and is being left behind in the climate transition.” The commission is “warning us of the extent to which we are failing and of the costs which this non-compliance will impose on our economy”, he said.

“It lays bare the inaction from Government on climate change. Ireland is facing hundreds of millions in fines for missing emission reduction and renewable energy targets. I cannot fathom how the Government cannot see that investing now will be so beneficial for the country.”

In an address to IBEC Energy and Climate Policy Committee on Thursday, Minister for Climate Action and Environment Denis Naughten said the National Development Plan sets out clear measures towards decarbonisation. These include almost €22 billion in funding for climate and energy projects, such as deeper retrofit of insulation in 45,000 homes every year from 2021 to 2040 to make them more energy efficient, up to 4,500 megawatts of renewable electricity generation, development of a renewable gas programme, rollout of the support scheme for renewable heat, and commitments on electric vehicles and low-emission public transport.

In addition, the planned closure of Moneypoint power station by 2025 and the ending of peat for electricity generation in advance of 2030 would have a significant, positive impact, he said.

“There is no magic bullet solution, and no one policy or single scheme is a panacea or a ready-made answer to the challenges we face. It will take concerted action across all the energy sectors to meet the decarbonisation challenge we all face,” Mr Naughten said.

Article courtesy of the Irish Times