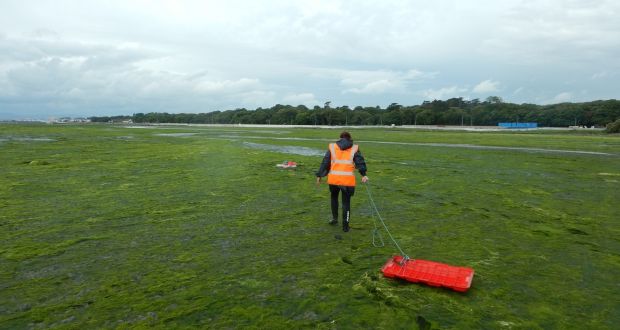 Sprawling beds of bright green seaweed caused by human waste products around the Irish coastline are thought to be on the rise, new research has indicated.  “Green tides” of seaweed known as sea lettuce appear when nutrients from various human waste products – including sewage and agricultural sources – flow into the sea and cause a proliferation of growth.

A two-year study of the substance by Earth and Ocean Sciences (EOS) and the Ryan Institute, both based at NUI Galway, found that in the case of the Tolka estuary in Dublin Bay, the amount of seaweed had grown in the past 20-30 years.

“Ireland is famous for its green countryside but this should not include our beaches too,” said Dr Liam Morrison, lead researcher on the project.

The study was published in the journal, Harmful Algae (although this particular seaweed is of no particular threat to humans) and was carried out by Dr Morrison and Dr Ricardo Bermejo. It examines seasonal “blooms” of two types of sea lettuce morphologies. The researchers extracted DNA to identify the range of species present.  Their development is caused by nutrients that flow into the sea as a result of human behaviour and include everything from urban, agricultural and industrial waste products. Such nutrient enrichment is on the rise globally, particularly along coastlines.

While green tides are not harmful to humans, the growth of sea lettuce can interfere with marine activity such as navigation, fishing and leisure activities. When it dies it can also deplete oxygen levels in the water, posing a threat to the marine ecology.  Dr Morrison said there was a need to reduce the levels of nutrients that flow into the water, particularly with the intensification of dairy farming and the removal of milk quotas that have helped fuel it.

The EOS study focused on the Tolka estuary to examine the effects of urban-sourced nutrients; and Clonakilty and Courtmacsherry bays in Cork for agricultural effects. “When you look out at the Tolka between May and autumn it’s covered in a dense mat of green macro algae or seaweed,” Dr Morrison told The Irish Times.  “What is really interesting is the amount of people that live within 10-15km of our coastline. This will obviously have an impact on water quality unless we have 100 per cent adequate waste-water treatment.”

The material is common in Ireland although surges in its growth have not reached the same problem levels as have previously been identified in other parts of Europe such as France and Italy.