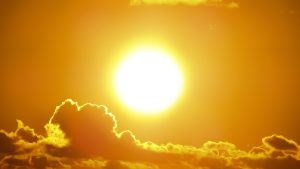 Without the Sun, Earth’s land, water, and air would all be frozen solid! Life on Earth would cease to exist as almost all living things rely on the steady light and heat of the Sun.

Changes in the Sun’s brightness can change global temperatures. Luckily, the Sun, like most middle-aged stars, shines steadily and reliably.

Almost all living things rely on the steady light and heat of the Sun.

Aside from its heat and visible light, the Sun also shines in ultraviolet (UV) light. Ozone in Earth’s upper atmosphere blocks much of the UV. However, pollution can weaken the ozone shield. Then the Sun’s UV light can harm living things on the ground and in the top layers of the oceans. Even when the ozone shield is strong, the UV that gets through help form smog from car exhausts and other pollution.

The heat and light of the Sun can be harnessed to generate electricity in the form of solar energy, which is becoming cheaper and more widespread, allowing us to burn less fossil fuels like coal or oil, as the burning of these fuels causes global warming by emitting carbon dioxide into the atmosphere, where it traps the Sun’s heat.